Lisbon - Bassani, the Italian Institute of Culture commemorates him on the 100th anniversary of his birth

Giorgio Bassani was born one hundred years ago, on the 4th of March of 1916. To celebrate this anniversary, the Italian Institute of Culture (IIC) in Lisbon will hold an event at 7:15 p.m. on March 15th to commemorate the Emilian-born writer with an event which will be attended by his daughter Paola Bassani, the president of the Giorgio Bassani Foundation. The IIC presentation note reads: “The event includes the screening of several videos tracing a significant and unforgettable profile of Bassani as man and writer, especially Silvana Palumbieri’s documentary ‘Il giardino perduto di Giorgio Bassani’ (‘Giorgio Bassani’s Lost Garden’). Bassani was born in Bologna in a Jewish middle-class family but spent his childhood and youth in Ferrara, which was later to become the throbbing heart of his poetic world. He moved to Rome in 1943 and it was not until 1945 that he gave continuity to his literary activity, working both as writer and journalist. After the publication of a first collection of poems and of a single book, “Cinque storie ferraresi” in 1956, Bassani achieved stardom with “The Garden of the Finzi Continis” (1962), which inspired the film by the same name by director Vittorio De Sica in 1970, and which won the 1972 Oscar for the best foreign language film. His later works were all developed around the great geographical and sentimental setting of Ferrara: “Behind the Door” (1964); “L’Airone” (1968);  “L’odore del fieno” (1973), which were united in a single volume entitled  “Il romanzo di Ferrara” and published together with the short novel “The Gold Rimmed Glasses” (1958), which was made into a film by Giuliano Montaldo in 1987. Bassani died in Rome on the 13th of April 2000 after a long illness. 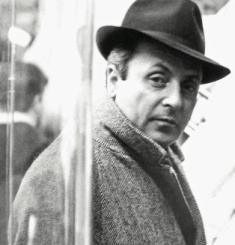