Italian pianist and composer Nicola Piovani has given two concerts at the Atterbury Theatre in Pretoria. However, the Italian musician is not in South Africa only for public performance. The winner of the Oscar for the score of Roberto Benigni’s film 'Life Is Beautiful', Piovani was in South Africa also for the filming of 'Liberation', for which he will compose the soundtrack. The film tells the story of an Italian diplomat serving in South Africa during the difficult years of the end of apartheid (1990-1994). The concerts were organised by Movements Entertainment, the South African production company that is making the film, in collaboration with the Italian Embassy in Pretoria, the Consulate General of Italy in Johannesburg and the Italian Institute of Culture in Pretoria. 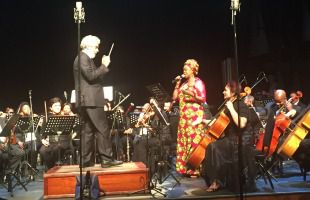 Consulate General of Italy in Johannesburg