This is the third African conference on the death penalty organized by “Hands Off Cain” to gain consent in the continent for the adoption of a moratorium on executions. I wish that, as it happened after Libreville in 2007 and Kigali in 2011, more African countries will put the executioner to rest and join the ranks of the abolitionist movement. (I am glad to see that there are delegations coming from all over the region)

As the presence here today of a delegation from the Republic of Mongolia demonstrates, across the global community there is a growing and deepening recognition that the death penalty has no place in modern and effective justice systems.

Until the late 1970s, only 16 countries had abolished the capital punishment for all crimes. Today, abolitionist nations are the overwhelming majority. More than two-thirds of Nations, over 150 of the 193 members of the UN, according to the last report by the Secretary General, have now rejected the death penalty or do not carry out executions.

This evolution was led by the recognition that in any judicial procedure there is always the risk of a miscarriage of justice. If a person is jailed and later found to be innocent she or he can be released and provided compensation for the time unduly spent in prison. This is not possible if an innocent sentenced to death has already been executed. The punishment is final and irreversible and there is no possible appeal from the grave. The death penalty is a toxic and destructive punishment that causes untold injustice and suffering. It represents the ultimate denial of human rights. In the words of Albert Camus, the French Nobel prize for literature, “capital punishment is the most premeditated of murders”

Unfortunately the cross-party in favour of the death penalty is still operating on a global scale. It goes beyond ideologies, religions, political trends (and) historical periods (and last, but certainly not least, international law). Gallows are still erected in capitalist democracies as well as in authoritarian or fundamentalist regimes, in poor countries as well as in rich and developed nations.

The list of crimes punishable by death is extensive and changes with time. Only the reason to justify the death penalty remains unchanged: it is considered as a deterrent against criminals; the supreme prerogative of the State to punish in “an appropriate way” the most heinous crimes. These are both specious and simply irrational reasons. No one has ever been able to demonstrate the deterrent effect of the death penalty on crimes. Executions do not deliver public safety or deter violent crime – instead they endorse violence, sometimes fuelling cycles of violence and retribution. It is no surprise the States that have abolished the death penalty often have lower murder rates than those that have yet to do so.(and this is true also for Africa) It is therefore of paramount importance that countries that still envisage the death penalty ensure that information and statistics regarding its use are made publicly available (so that a public discussion, and evaluation, of its use can be promoted). Only an objectively informed public opinion can accept and support reforms of the penal system aimed at abolishing the capital punishment as cruel and ineffective. (We are not advocating impunity, far from it, we are promoting the notion of the development of international law that over the years has codified the right for individuals of not being killed by their own state. Many of you here today have also been powerful supporters of the International Criminal Court and other ad hoc or special courts, like the one that just ended its work here in Freetown, that want to promote and implement the highest standards of international law in the global fight against impunity and do not foresee capital punishment)

Nowadays there is a growing awareness on the issue - both on behalf of Governments and of public opinion - and it is a fact that the trend towards abolition finds echoes in every region of the world. Even retentionist countries which head today the sad tally of executions are rethinking their approach. (let's take China for example:) China’s highest court, now the only Court capable of issuing death penalty, imposes that judges bar confessions extracted under torture or duress (and) avoid applying the death penalty when the evidence is shaky. (Far from being ideal, I am of the opinion that it is a step in the right direction). Singapore amended its penal code to restrict the use of mandatory death penalty. (and here we have the golden example of dozens of African countries who are applying the same restriction:) Sierra Leone, along with many of its West African neighbours, has come a long way in acting for abolition thanks to an enlightened leadership. Let’s not forget that, in October 1998, less than 20 years ago, in the outskirts of this city, two dozen people linked to the previous year’s coup were publicly put to death in one of the biggest recent mass executions. Nowadays those wretched times of civil war are over, as is the application of the capital punishment. The national constitutional review process launched (here in Sierra Leone) in July 2013 will need to face also the issue of the death penalty, coherently with the engagement taken by the Sierra Leonean Government with the international human rights bodies.(I am confident that under the leadership of President Koroma that process will contribute greatly also to the protection and promotion of human rights in Sierra Leone).

Having said so, we must recognize that much progress still remains to be done. The situation in many countries is still a cause of grave concern. In some cases, we have witnessed the worrying phenomenon of some countries, which had previously agreed on endorsing the moratorium, to take the decision of re-establishing the death penalty. This is an involution which has distinguished mostly Asia but also this continent, with the reactivation of executions in Nigeria and Gambia.

Italy is proud to be part of the cross-regional coalition of States supporting the international campaign against the capital punishment. We took a strong and principled position against the death penalty. We are convinced that it denies a person his fundamental rights and means no added value in terms of security or deterrence (nor to the administration of justice). This campaign represents a priority for Italy's foreign policy and has the full support of our Parliament and civil society. My presence here at the conference organised by “Hands Off Cain” is the evidence of this fruitful collaboration between different parts of the Italian society.

Let me take this opportunity to recall the efforts by the Italian Government to build universal support against the death penalty. Italy has been a major sponsor of the United Nations’ General Assembly Resolution on a universal moratorium of the death penalty since its inception (in fact since 1994!). We are an active part of the interregional task force entrusted with its drafting. We also are one of the most active promoters of the campaign to convince countries previously abstaining or voting against the text to switch their votes in favour of the resolution.

The overall aim is to increase support among States while also furthering the content of the initiative. While not legally binding, the UN resolutions have been a political breakthrough, sending a strong message to the minority of countries still adhering to capital punishment that it is time to reject what is increasingly seen as a cruel and counter-productive practice.

It is hard to overstate progress on this issue. A watershed moment came 6 years ago when, in December 2007, the UN’s 62nd General Assembly first adopted a resolution calling for a universal moratorium on the death penalty, with a view to a complete abolition.

This achievement was reinforced by three further UN General Assembly resolutions, in Decembers 2008, 2010 and 2012. On each occasion, the vote supporting the call for a moratorium gathered strength: rising from 104 votes to 111, while those States voting negatively fell from 54 to 41. Next fall, first the UN General Assembly Third Commission and then its plenary shall negotiate and vote the fifth resolution on the universal moratorium. We will try to reinforce also the content of the text, calling for the imposition of death penalty only for the most serious crimes and to establish a Special Rapporteur or Special Adviser of the Secretary General on the issue of death penalty.

For that occasion I hope that the countries of West Africa which have voted in favour of the resolution in 2012, like Sierra Leone, Benin, Mali, Togo (and also Rwanda), will confirm their support and those which abstained, as was the case for Senegal, Liberia, Niger, Ghana and Guinea, will back the resolution. Many of those countries are already de facto abolitionists and it will take a small step to make the stance in multilateral fora coherent with their internal penal policy.

Let’s hope that on the next African meeting with our friends of “Hands off Cain” we will gather to celebrate another step towards the complete abolition of the death penalty in this continent, looking forward to experience soon a death penalty -free Africa. 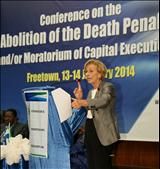