Italy in the Arctic: the political dimension

Italy was admitted to the Arctic Council as Observer country in May 2013. The Arctic Council ministerial meeting in Kiruna acknowledged the size and importance of Italian Arctic activities. Italy’s contribution to scientific research in the Arctic includes the building of important observation platforms in Ny Ålesund, such as the Amundsen-Nobile Climate Change Tower, and a number of other research projects, including OGS Explora’s cruises in the Arctic waters. As for Italian economic activities, Eni has extraction programs in Norway and Russia and is implementing some remarkable projects aimed at improving safety conditions of transport by sea (against oil spills), mitigating its environmental impact and safeguarding indigenous communities in a rapidly changing ecosystem hit by climate change.

The challenge posed to the Arctic environment by global warming needs to be tackled globally by the international community in close coordination with Arctic States. The most important dialogue forum on this issue so far is the Arctic Council.

Italy considers the Arctic Council, with its wide range of members (Member States, Permanent Participants, Observers, Task Forces, Working Groups,…), the main debate forum for the Arctic, where the different features and issues of this complicated region and all viable forms of cooperation are discussed. Twenty years after its establishment, the Arctic Council today goes beyond its original concept of an inter-Arctic consultation forum. It has become indeed a vehicle for regional stability, whose increasing relevance is proved not least by the growing number of its Observer countries – including some European Union Member States and various Asian countries.

Changes in the Arctic region depend mainly on phenomena occurring at different latitudes and are likely to have tangible repercussions on a global scale. Therefore, a common approach is needed to deal with the new challenges arising, from global warming to the opening of Polar navigation routes. Global phenomena call for a global approach, implying new responsibilities not only for the Arctic States but for the whole international community.

The recognized national jurisdictions of the Arctic States are completed and integrated by customary international sea law and by a number of Treaties. The most important is the United Nations Convention on the Law of the Sea (UNCLOS) . As a State party to UNCLOS, Italy abides by its clauses, including those related to a responsible management of the Arctic Ocean. Italy also abides by the rules of other legal instruments that indirectly concern the Arctic region: the Convention on Biological Diversity (CBD), the Convention on Long-Range Transboundary Air Pollution (CLRTAP), the International Convention for the Prevention of Pollution from Ships (Marpol 73/78) and the International Convention for the Safety of Life at Sea (SOLAS). Moreover, Italy is one of the original signatories to the Svalbard Treaty.

In the Arctic, large areas are subject to national sovereignty. Italy fully respects these sovereign rights and is ready to play its role to confront global challenges with its scientific and technological expertise and with its leading companies, thus contributing to a sustainable Arctic development while respecting the ecosystem and indigenous peoples. Given the primary relevance of the human dimension, Italy considers it to be extremely important to raise awareness on such issues. This should be done through a growing, internationally coordinated effort, working in concert with the Arctic States.

In this context, the European Union, that in practice takes part in the work of the Arctic Council as observer, has been playing an increasingly important role with its policies to stop global warming. In 2008 the European Commission adopted a document entitled The EU and the Arctic region, which highlights the impacts of climate change and of unprecedented human activity in the Arctic. It was followed in 2012 by a Commission/EEAS Joint Communication, whose contents are espoused by Italy. A new Commission/EEAS Joint Communication on the topic was issued on April 27th, 2016.

In order to add value to its Arctic scientific and economic footprint and to prove its commitment to a gradual process of enhanced integration in the region, Italy has embarked on a number of initiatives on both a national and international level.

On a multilateral scale, Italy takes part in the Senior Arctic Officials (SAO) meetings (the Italian Ministry of Foreign Affairs and International Cooperation appointed to this end a specialized diplomatic representative). We also take part in some Working Groups through the Italian SAO, our Embassies or by means of experts selected by the CNR or other Italian scientific agencies such as ENEA (National Agency for New Technologies, Energy and Sustainable Development), INGV (National Institute for Geophysics and Volcanology) and OGS (National Institute of Oceanography and Experimental Geophysics). Italy cooperates with the Arctic Council at all levels, from the Task Forces to the Working Groups, where it provides an active contribution in different fields of research thanks to the considerable expertise of its scientific community. Furthermore, in the EU framework Italy has recently promoted an initiative to foster relations and dialogue between the Baltic Region Strategy’s stakeholders and those of the Adriatic-Ionic Strategy. The Italian project aims at the exchange of experiences and best practices, and could potentially develop into a process of increasing integration between the actors of said Strategies.

Italy considers the Arctic Ocean highly relevant also to the European Union. In this respect, Italy played an active role in the drafting of Directive no. 30/2013/EU of June 12, 2013 on safety of offshore oil and gas operations, expressing remarks and proposals aimed at consolidating safety standards in the upstream offshore field. The Directive states that “the serious environmental concerns relating to the Arctic waters require special attention to ensure the environmental protection of the Arctic in relation to any offshore oil and gas operation, including exploration, taking into account the risk of major accidents and the need for effective response”. To this end, Italian institutions are ready to put their expertise at Arctic States’ disposal, by cooperating in the framework of the Arctic Council to ensure that the highest standards of safety and environmental protection are applied to exploration and extraction of oil and gas in the Arctic.

At bilateral level, Italy is holding informal consultations with the Arctic Council Member States in order to define possible fields of scientific and economic cooperation. Such consultations shall be followed by the establishment of “bilateral working tables” composed by representatives of the scientific and business communities of each country and meeting at regular intervals. Informal contacts are being kept also with the Saami Council, with a view to launching new studies on the culture of Arctic inhabitants in concert with Italian academic institutions.

At domestic level, many initiatives have been taken to increase awareness of the Italian presence in the Arctic region and to reinforce our proactive approach. In addition to our current scientific programs, other projects by the Ministry of Foreign Affairs and International Cooperation (MFAIC) include: the International Conference on Climate Change in the Arctic in December 2014 at Venice International University attended by the SAOs of Arctic Council member States and representatives of CNR, Eni and Finmeccanica[22], the conference on Ice and resources: the Arctic as a new geopolitical scenario organized in the Chamber of Deputies by IsAG (Institute of Advanced Studies in Geopolitics and Auxiliary Sciences) with the participation of all the Ambassadors to Italy of Arctic Council States, and the conference on Environmental Sustainability and Use of Resources in the Arctic Region, hosted by the Ministry itself and organized by the review Diplomacy in the framework of the 6th Festival of Diplomacy.

From March 7th to September 30th SIOI (Italian Society for International Organization), in partnership with the MFAIC and the Ministry of the Environment and Protection of Land and Sea, will be offering the first Italian Master course dedicated to Arctic issues (Master in Sustainable Development, Geopolitics of Natural Resources and Polar Studies). The course is designed to develop knowledge and competence pertaining to the green economy, energy geopolitics and responsible use of natural resources.

An informal, open-ended consultation group on the Arctic, the Tavolo Artico (Arctic Table), has recently been reactivated. It aims at the exchange of information and coordination of activities of the main Italian actors active in the region under the aegis of the MFAIC. Today, it has 25 members from academic, scientific and business communities. Diffusion and divulgation activities by private actors are also encouraged and supported by the Italian institutions, with the purpose of fostering a more widespread interest in Arctic issues on a national scale. 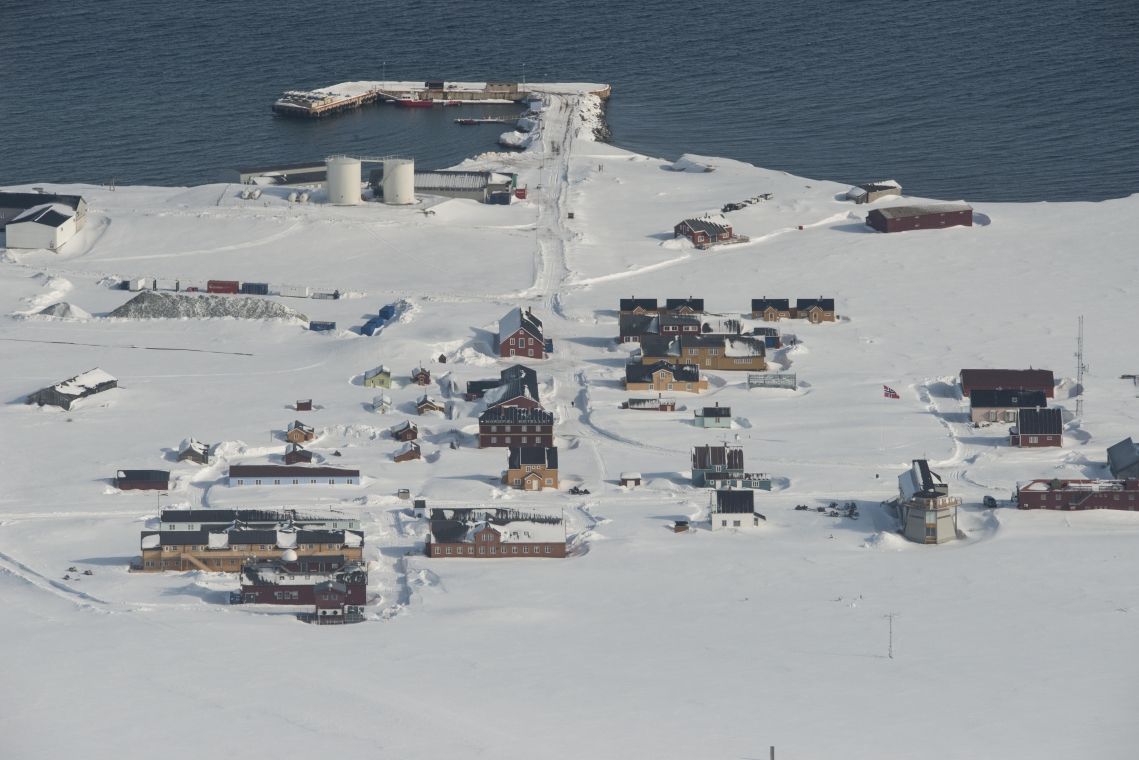 Council of the Baltic Sea States

The Nordic Council of Ministers

United Nations convention on the law of the sea

International Convention for the Prevention of Pollution from Ships (MARPOL)

International Convention for the Safety of Life at Sea (SOLAS), 1974