Italy’s largest science and technology park, boasting a concentration of some of Europe’s most important researchers, the Area Science Park hosts Italian, foreign and international research centres and national and regional institutes for basic and applied research in various sectors ranging from biotechnology and genomics to material physics, applied pharmaceuticals, food, microelectronics and computers.
The Ministry of Foreign Affairs places a high priority on supporting and strengthening the Trieste System and the International Science and Technology Pole, in close collaboration with the Ministry of Universities and Research and the local and regional administrations concerned. Given the obvious benefits to Italy, this is not only in terms of technological progress and innovations applied to our businesses, but also for the international prestige it has received from the Trieste System as an effective platform for the sustainable and eco-compatible development of emerging countries.
The experts engaged here are from all over the world, while tens of thousands of developing country researchers have been trained in Trieste and now occupy positions of importance in scientific, economic and political sectors of their countries of origin, representing a strategic medium-term investment by Italy in developing countries.
The international system of Trieste has long had close relations with the Group of 77 and with the UN Secretariat General. Moreover, the UN agencies in Vienna, Geneva and Paris hold scientific consultations and collaborations with Trieste’s international centres. The unity of the international system in Trieste was officially recognised in March 2004 by the Executive Council of the Inter Academy Medical Panel, which underlined the importance of the Trieste Pole in promoting science and the transfer of technologies to developing countries. As a result IAMP transferred its own Executive Secretariat from Paris to Trieste, thereby benefiting from the logistical support and financial support of the local administrations. The presence of the IAMP in Trieste also brings an important dimension of health promotion in developing countries to the Pole.

The UNESCO/AIEA International Centre for Theoretical Physics (ICTP)
In close concert with the Universities of Trieste, Udine and Padua, Sincrotrone Elettra of Trieste and CERN, the ICTP is internationally known and accredited. Over 90,000 researchers from more than 100 primarily developing nations have been trained at the centre in the course of its over 40 years of activity. These researchers are considered those countries’ best investment in S & T and they often maintain intense professional contact with Italy. Italy financed 85% of its 2007 activities with a contribution of nearly 18 million euro from the Ministry of Universities and Research. It also received smaller voluntary contributions from national and international organisations for research and training activities in developing countries. Director of the Centre is Professor Katepalli R. Sreenivasan (India) and Deputy Director is Claudio Tuniz (Italy)
The ICTP organised the G8/UNESCO World Forum on Education, Research and Innovation: New Partnership for Sustainable Development, which was held in Trieste from 10 to 12 May 2007.

International Centre for Genetic Engineering and Biotechnologies ICGEB
With two headquarters, one in Trieste and one in New Delhi, the ICGEB was set up in 1984 by UNIDO to carry out research and training activities mainly on behalf of developing countries. It became an autonomous UN organisation in 1994 and boasts 55 current members, which are mostly developing countries. Over 400 researchers from developing and/or emerging countries operate from the two locations. Their main functions are: to transfer knowledge in genetic engineering and biotechnologies to emerging and developing countries, and to supervise its aims and use; to carry out research activities and training and specialised courses with long-term study grants. Financed by the Italian government (12.4 million euro annually from the Directorate General for Cultural Promotion and Cooperation, equal to 85% of the ICGEB budget) and, to a lesser extent by India, since 1999 the international centre also relies on the obligatory contributions of its member countries. The Centre’s Director General is Francisco Baralle (Argentina) and Director of the Trieste Component is Mauro Giacca (Italy). At the November 2005 Board the ICGEB approved establishment of its third component in Africa, and at the November 2006 Board it ratified the choice of South Africa as the country to host it. The third component of the ICBEG was inaugurated in Cape Town, South Africa in September 2007.

International Centre for Science and High Technology (ICS)
Founded in 1988 as a UNIDO pilot project on the initiative of Nobel Laureate Abdus Salam, it became an autonomous scientific organisation within the UNIDO structure following an Italy/UNIDO agreement signed in Vienna on 9 November 1993 and ratified in 1996. It function is to transfer technologies and scientific knowledge to developing countries in the sectors of applied chemistry, high technology, new materials and environmental sciences. The Centre’s programmes follow the guidelines proposed by the MFA. The Centre is financed by the Directorate General for Cultural Promotion and Cooperation (3.6 million euro annually) and is administered by a Steering Committee made up of 2 UNIDO delegates and 2 Italian delegates from Office III of the same Directorate of the Ministry of Foreign Affairs.

Third World Academy of Sciences (TWAS)
Set up in 1983, TWAS achieved the status of non-governmental organisation under the aegis of UNESCO in 1985, and its participants currently include 94 Academies of Sciences in developing and emerging countries around the world. TWAS sponsors programmes proposed directly by the researchers of developing countries and which are to be carried out on-site or in the centres of excellence and universities of advanced countries. It supplies technical assistance and covers equipment costs for developing country research centres, as well as study grants, awards to scientists of emerging countries, the dissemination of scientific publications and teaching materials. It avails itself of the consultancy of over 600 renowned scientists, approximately 20 of whom are Italian. The Italian government and UNESCO signed the Paris Accord on 8 December 1998, which was ratified in January 2004, and since then the Ministry of Foreign Affairs has made an annual obligatory contribution; that of 2007 was approximately 1.6 million euro. The President of TWAS is J. Palis (Brazil); there are four Vice-Presidents: Allende (Chile), Chunli (China), Serageldin (Egypt) and Makhubu (Swaziland); its Secretary General is Balasubramaman (India); ICTP Director Prof. Sreenivasan (India) is a TWAS member.
La TWAS ha avuto un ruolo fondamentale nella costituzione della TWNSO nel 1988 e della TWOWS nel 1993. Nella X° Conferenza (2-6 settembre 2006, Angra dos Reis) è stata decisa la creazione del COSTIS a Trieste con la trasformazione della TWNSO. La TWAS ha, inoltre, coordinato la venuta a Trieste del Segretariato IAP, nel 2000 e di quello dello IAMP, nel 2004.
TWAS had a determining role in the establishment of TWNSO in 1988 and of TWOWS in 1993. It was decided at the 10th Conference (2-6 September 2006, Angra dos Reis) to create the COSTIS in Trieste with the transformation of TWNSO. TWAS also coordinated the transfer to Trieste of the IAP Secretariat in 2000 and that of IAMP in 2004.

Permanent Secretariat of the Inter-Academy Panel (IAP)
Established in May 2000, it unites over 80 national Academies of Science of as many countries, and acts as interlocutor/consultant to the governments of developing countries as they confront major global issues, with a special focus on dialogue. It offers governments and international organisations highly specialised scientific skills and facilitates contact with the scientific institutions of industrialised countries. IAP Executive Board Chairman is President of the Academia Nazionale dei Lincei Prof. Giovanni Conso; its Permanent Secretariat was set up with TWAS on 14 May 2000 and it is hosted by ICTP. Italy’s obligatory contribution (through the Directorate General for Cultural Promotion and Cooperation-Office III) has been775,000 euro annually since 2004 with ratification of the Italy/UNESCO Accord of December 2003.

Executive Secretariat of the Inter-Academy Medical Panel (IAMP)
Instituted in 2000 with the Congress of Scientific Academies, IAMP membership consists of physicians and scientists from around the world. Participants include 10 countries and regional groups (USA, India, Japan, UK, Sub-Saharan Africa, Turkey, Philippines, Mexico, France and China). The IAMP promotes cooperation between public health-related scientific academies, acting as consultant to those responsible for health policies. IAMP also acts as interlocutor and consultant to the governments of developing countries. Its Executive Secretariat’s location in the TWAS headquarters in Trieste was decided in Paris on 25 March 2004, with the financial support of the local authorities: the government of the region of Friuli-Venezia-Giulia made a contribution of 150,000 euro in 2007.

Coordinating the Pole with other centres of S & T excellence in Friuli Venezia Giulia, the Area Science Park Consortium and the Central European Initiative (CEI)
In April of 2004 an agreement was signed on the coordination of the above-mentioned international science and technology centres in Trieste.
By means of this agreement the Trieste international scientific institutions located in Trieste launched a mutual collaboration, extended also to the Area Science Park Consortium, an Italian public body hosting 75 national and regional research centres with over 1,600 employees. This coordinated effort is aimed at strengthening synergies between the Trieste institutions and at their increased accreditation on the world research scenario and at better interfacing with the UN family of agencies.  The ICGEB already maintains contact with the UN Secretariat in New York and with the United States’ prestigious National Academy of Sciences. In addition to fostering sector synergies, the Trieste Coordination offers an international point of reference for training in the field of experimental and theoretical sciences.
The evolution of the Trieste International System has received major growth incentive from this agreement, which has thus far been signed by 34 research institutes and private centres, as well as prestigious universities of the region. It was signed on 27 January 2004 at the Science and Technology Park of Trieste by Secretary of State Roberto Antonione for the Ministry of Foreign Affairs and Hon. Guido Possa for the Ministry of Education, Universities and Research, as well as President of the region Illy. 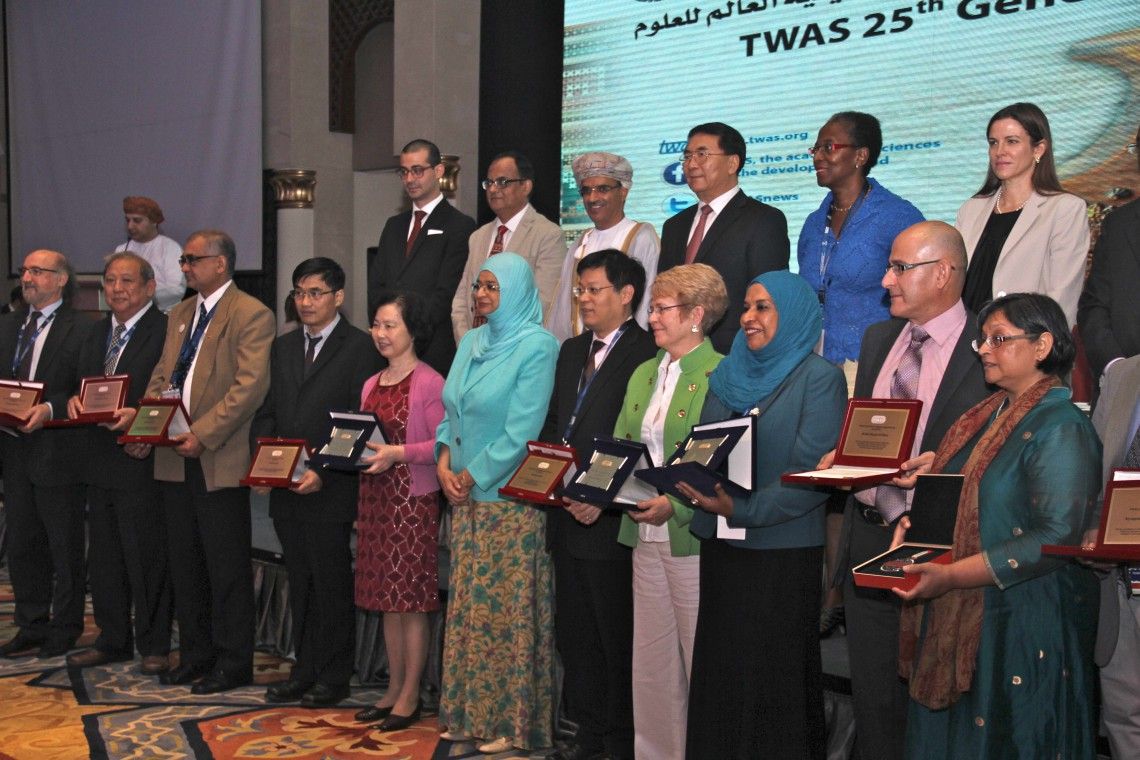