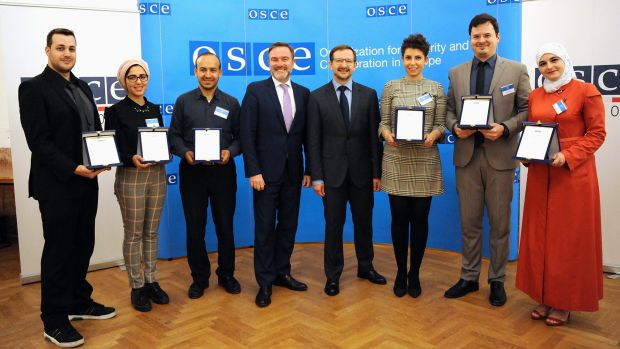 Lina Al-Kurdi from Jordan, Leila Rima Boussada from Algeria, Othmane Benhlima from Morocco, Ati Nisaf from Tunisia, Yakir Tadmor from Israel and Yara Yassin from Egypt, all under 35 years of age, were awarded for their innovative business ideas aimed at achieving environmental impact while at the same time pursuing social objectives.

The grants can be used for the adoption of new technologies, processes or methods of production, introduced to build and develop socially and environmentally sustainable businesses.

“In the Mediterranean region, small and media sized enterprises represent the vast majority of firms. They account for between one half and three-quarters of total employment and contribute substantially to innovation and value creation,” said Chairperson of the OSCE Permanent Council Ambassador Alessandro Azzoni.

OSCE Secretary General Thomas Greminger said that more than a quarter of the population in Algeria, Egypt, Israel and Morocco is aged below 15 years old, and in Jordan they represent more than a third of the population. “In order to harness this potential and to ensure their social integration, we need to encourage young people’s economic participation. This must be a strong priority for everyone interested in the prosperity, security and stability of the Mediterranean and by extension of the entire OSCE region.”

This first phase of the OSCE GEMS Award is fully sponsored by the Italian Government. The call for applications was open from 25 September to 10 November 2017. In total, 240 applications were received, 30% of which were submitted by female entrepreneurs. However, four out of the six winners are women.

“In line with the spirit of Palermo, Italy attaches great importance to collaboration with OSCE Partners for Co-operation” said Azzoni. “Enhancing security in the Mediterranean and thus across the OSCE is a priority for our Chairmanship.”

This is in reference to the OSCE Mediterranean Conference in Palermo in 2017, where the Italian Chairmanship recognised opportunities for co-operation in the Mediterranean trough an inclusive approach and by raising awareness of the great potential of the region.

“Italy’s geographical location has always shaped its attitude towards dialogue and co-operation. We are thus deeply aware that our security, stability and prosperity depend on the prospects of our common sea,” Azzoni said.

Azzoni added that the Mediterranean region has immense untapped potential as it represents 1% of the Earth's surface, 10% of the world’s GDP, 500 million potential consumers, 20% of the maritime traffic, 30% of the commercial traffic, and has a 4.4% annual economic growth.

Under the 2017 Italian Chairmanship of the OSCE Mediterranean Contact Group, at the initiative and with the financial support of the Italian Ministry of Foreign Affairs and International Co-operation, the OSCE partnered with the Switchers Fund and its promoters to make this project possible. The OSCE Italian Chairmanship 2018 continues to support the project.

The Project is implemented by the European Federation of Ethical and Alternative Banking (FEBEA), SEFEA Consulting, and the Regional Centre for Sustainable Consumption and Production (SCP/RAC) under the UNEP/Mediterranean Action Plan.