Established through the cooperation between institutions, the Ministry of Foreign Affairs and International Cooperation and the Ministry of the Interior, civil society organisations, the Community of Sant’Egidio, the Federation of Evangelical Churches and ‘Tavola Valdese’ of the Waldensian Evangelical Church, humanitarian corridors are an Italian reception programme for migrants in particularly vulnerable conditions. These include single women with children, victims of human trafficking, elderly people and disable or sick people.

The programme envisages, over a two-year period, the entry of more than 1,000 people from Lebanon (Syrian refugees) and from Morocco (migrants from Sub-Saharan African countries fleeing from situations of risk caused by conflicts, terrorism, political instability, poverty, famine, drought). The first two arrivals of migrants consisted of nearly 200 refugees from Lebanon.

A way of also meeting our need of security

The list of possible beneficiaries of humanitarian corridors is screened by the Ministry of the Interior after receiving a first list of the cases most in need of protection in the Countries included in the programme, from the Community of Sant’Egidio the Federation of Evangelical Churches and ‘Tavola Valdese’. The Ministry of Foreign Affairs and International Cooperation subsequently carries out the controls necessary for the issue of a visa.

The Community of Sant’Egidio, the Federation of Evangelical Churches and ‘Tavola Valdese’ are in charge of receiving the beneficiaries once they arrive in Italy, assuring them an accommodation and economic aid over the time needed to file an application for international protection. The funds for the humanitarian corridors are drawn from the 0.8% devolved to the Tavola Valdese (that taxpayers can devolve to charitable organisations from their income report), from private donations and from the 0.5% of income tax payments devolved to the Community of Sant’Egidio. The reception and integration system also involves volunteer organisations in more than 10 Italian regions, which comprise a cornerstone of the project.

Humanitarian corridors are a pilot project that shows that it is possible to guarantee regular entries through legislative instruments already made available by the European Union, thus avoiding risk-laden “journeys of hope”. The project can be replicated in other Countries in partnership with civil society organisations and is a model of solidarity that is a source of pride for Italy, as also Pope Francis said: “I would like to mention and express admiration for the initiative of humanitarian corridors for refugees (…) it is the drop that will change the sea.” 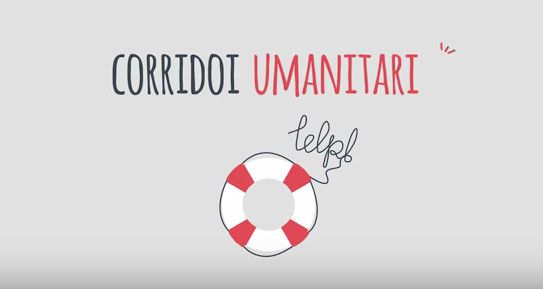 Humanitarian corridors, a model for Europe

Humanitarian corridors, a model for Europe

#CorridoiUmanitari: not only numbers but individuals

#CorridoiUmanitari: not only numbers but individuals