Somalia: Italy at Mogadishu’s side in the stabilisation process, says Valensise

“Somalia is making a great effort to stabilise the country, an effort that we support from both the political and the economic standpoints. We aim to encourage the mobilisation of resources that can foster the development of a country that has great potential”. The point was underscored by the Secretary General of the Foreign Ministry, Michele Valensise, in the margins of a conference on “A new era for Somalia: what role for Italy and the UK?", organised in Villa Wolkonsky, the official residence of the British Ambassador to Italy.

The time is right to emerge from the crisis

“The impression is that, after years of suffering and instability, the time really is right to help Somalia emerge from the crisis and mobilise the energies of its people and leaders. Italy will be at their side: Somalia is too important for us”. This was the point underscored by Valensise, who pointed out Italy’s commitment to supporting the judicial sector “in strengthening the courts and prison system, with due respect for Somali laws and traditions”.

The Secretary General sees the strategy to rebuild Somalia developing along two tracks. “The economic track, capitalising on natural resources and a highly active private sector, and institution-building. Because no economic capacity can be harnessed to the full unless the state functions are on a firm footing – at both the central and decentralised government levels – and procedures are transparent”.

Mogadishu: Italy and GB must lead the EU in the reconstruction

Somalis has great potential, deriving from thousands of hectares of agricultural land, “fisheries and natural resources and Africa’s longest coastline. We hope that Italy and Great Britain will help us develop those resources”. This was the point underscored by the Secretary General of the Somali Foreign Ministry, Mihamed Sharif Mohamud, who hoped that Italy and Great Britain would lead the EU in the reconstruction. “There, the most important thing is security”, he explained to conference participants, who included Italian and British business people. Mohamud reminded them that Italy “has left a unique heritage in Somalia”, starting with the agricultural sector. “We have friendly relations with the Gulf states, but their support policies would be more fruitful if combined with Western expertise and technology”, noted Mohamud.

British Ambassador: a shared commitment in Rome and London to help Somalia

A Conference on Somalia is scheduled to take place in London on 7 May 2013. In this light, the British Ambassador to Rome, Christopher Prentice, gave an assurance of Italy and Great Britain’s “shared commitment” to rebuild a country that has reached a “significant turning point” but where the Shabaab continue to threaten peace. “By working together, the EU, G8 and African Union can help the Somali Government to create a more secure and prosperous future for its people”, concluded the Ambassador. 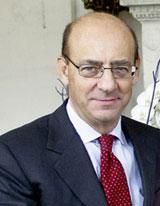