Italy and its European partners strongly condemn the violation of Ukrainian sovereignty and territorial integrity and call on Russia to immediately withdraw its armed forces. They view the political-diplomatic channel as the only way to resolve the crisis. These were the positions to emerge from the extraordinary meeting of the Council of European Union Foreign Ministers which took place today in Brussels. On Thursday 6 March an extraordinary Council of EU Heads of State and Government is planned, during which, as Foreign Minister Federica Mogherini reported, “possible targeted measures” will be evaluated.

The common goal, underscored Mogherini, is to “prevent the situation in Crimea and eastern Ukraine from precipitating further”. Indeed, the EU Foreign Affairs Council conclusions state that “in the absence of de-escalating steps by Russia, the EU shall decide about consequences for bilateral relations between the EU and Russia”.

“Today’s discussion was a long one” added the Foreign Minister. “Italy, along with Canada, France, Germany, Japan, the United Kingdom, the USA and the Presidents of the EU Council and of the Commission, has decided to suspend its participation in the G8 preparatory meetings”.

“We, the leaders of Canada, France, Germany, Italy, Japan, the United Kingdom and the United States and the President of the European Council and President of the European Commission, join together today to condemn the Russian Federation’s clear violation of the sovereignty and territorial integrity of Ukraine, in contravention of Russia’s obligations under the UN Charter and its 1997 basing agreement with Ukraine. We call on Russia to address any ongoing security or human rights concerns that it has with Ukraine through direct negotiations, and/or via international observation or mediation under the auspices of the UN or the Organization for Security and Cooperation in Europe. We stand ready to assist with these efforts.

“We also call on all parties concerned to behave with the greatest extent of self-restraint and responsibility, and to decrease the tensions.

“We note that Russia’s actions in Ukraine also contravene the principles and values on which the G-7 and the G-8 operate. As such, we have decided for the time being to suspend our participation in activities associated with the preparation of the scheduled G-8 Summit in Sochi in June, until the environment comes back where the G8 is able to have meaningful discussion.

“We are united in supporting Ukraine’s sovereignty and territorial integrity, and its right to choose its own future. We commit ourselves to support Ukraine in its efforts to restore unity, stability and political and economic health to the country. To that end, we will support Ukraine’s work with the International Monetary Fund to negotiate a new program and to implement needed reforms. IMF support will be critical in unlocking additional assistance from the World Bank, other international financial institutions, the EU, and bilateral sources”. 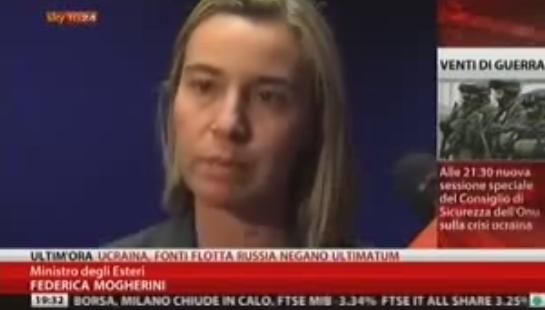