“The meeting during the night with refugees just over the border who have been waiting for days to get into Jordan…these are situations and faces that terrify you. You don’t even need to ask what their stories are, it’s in their eyes”. The recollection is still fresh in the mind of Annalisa Vandelli, journalist, photographer and writer, who reports on #Farnesina.

The Sassuolo-born reporter works with Italian NGOs and cooperation workers to chronicle the tragedy of international crises and Italy’s engagement in emergency areas. In her latest reports from Lebanon and Jordan for the Directorate General of Development Cooperation, she describes the drama of those fleeing Syria and the new refugee camp of Azraq, equipped to host 130,000 persons. Here the Italian Cooperation has donated a hospital that offers out-patient, obstetrics, paediatric, surgical and other emergency services to refugees.

A question of faces

A reflection on photography as a way of keeping the world’s attention focused on forgotten crises, thanks not least to the camp workers. From anti-poverty efforts to support for the social and economic development of marginal regions, to projects for the development of sustainable tourism and cultural enhancement. Stories told by persons who put themselves on the front line because, as Annalisa explains, “the cooperation offered by Italians is not only a question of numbers, but of faces more than anything”.

The Italian Cooperation in Syria 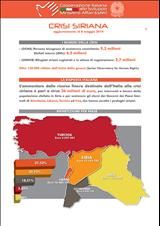