As part of the European Space Agency’s Rosetta Mission, the Philae lander has made its landing on comet 67P/Churyumov–Gerasimenko.The technical and scientific contribution to the mission by Italy’s research centres and industries was coordinated by the Italian Space Agency (ASI).

Finmeccanica – Selex ES, Telespazio and Thales Alenia Space made a decisive contribution to the success of the Rosetta mission, with ground equipmentas well as numerous instruments and systems on board the Philae lander. These include the Sample Drill and Distribution (SD2) made by Finmeccanica– Selex ES.

The company also produced sophisticated electro-optical instruments for ASI. Examples are theAutonomous Star Tracker (A-STR), the NAVCAM camera, the Visible and InfraRed Thermal Imaging Spectrometer (VIRTIS), the Grain Impact Analyser and Dust Accumulator (GIADA). And – with a surface area of 62 square metres and length of 14 metres – the biggest photovoltaic panels (Photovoltaic Assembly) ever produced for an ESA scientific mission.

Finmeccanica – Telespazio, with its subsidiary Telespazio VEGA Deutschland, designed and produced the mission control and planning system for the European Space Operations Centre (ESOC)as well as the real-time simulation system. And Finmeccanica – Telespazio experts are part of the ESA team that managed Rosetta and of the team at the German Space Agency (DLR), which was responsible for the technical management of the Philae lander.

Thales Alenia Space was involved in the assembly, integration and testing of the probe, as well as important mechanical and electrical ground support equipment. The company also built the probe’s special S-band and X-band digital transponder, used for communications with Earth. Read more, in Italian. 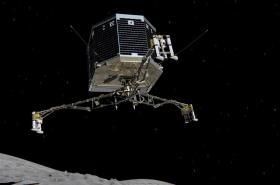