The Italian Ambassador in Seoul, Marco della Seta, and the Director-General of the Creative Economy Policy Bureau at South Korea’s Ministry of Science, ICT and Future Planning (MSIP), Choi Young-Hae, signed the two countries’ new bilateral scientific and technological cooperation Executive Protocol for 2016–18 in the South Korean capital on 9 December 2015.

In addition to Director-General Choi Young-Hae, also present on the South Korean side, were Kim Donghyun, Assistant to the Director-General, Choi WonKeun, Manager of the Global Cooperation Team at the National Research Foundation (NRF), and MSIP interpreter Hong Jooyeon. Attending for Italy, in addition to Ambassador della Seta, was the Science attaché in Seoul, Francesco Canganella.

The Italian and South Korean delegations acknowledged the excellent relations between the two countries and agreed that scientific and technological research is an effective and essential tool in developing economic, social and cultural bilateral relations. The delegations selected six Scientific Projects of Great Relevance to be co-financed during the three-year duration of the protocol.

The projects – which involve Italian and South Korean researchers – were selected out of the 110 projects submitted in response to a joint call for proposals in the following areas of research: agro-food, basic science, biotechnology and health, energy and the environment, ICT (including robotics and automotive technology), nanoscience, advanced materials and space sciences.

“The new Executive Protocol is part of an unbroken series of three-year agreements that began in 1984 and that, up to now, has substantially contributed to enhancing scientific relations between Italian and South Korean researchers,” said Ambassador della Seta. “The new projects are in areas of great interest for both countries, in cutting-edge fields with considerable potential spinoffs on technology and trade”. 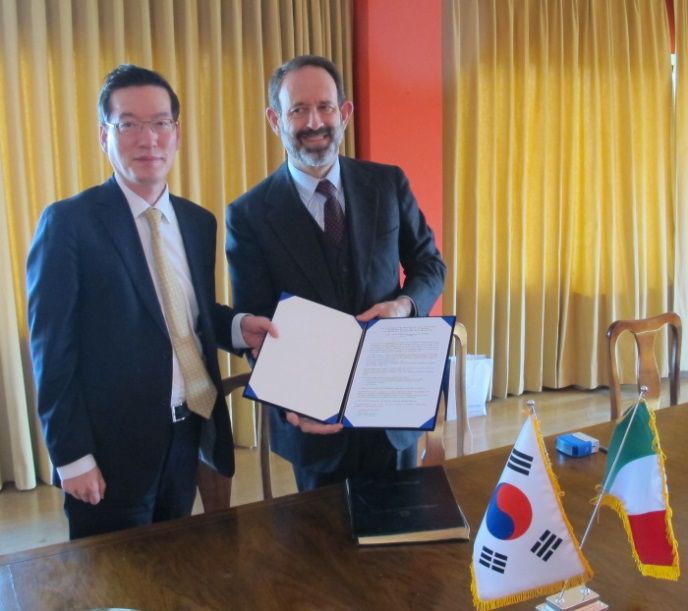