The Band of the Carabinieri, Italy's national military police, will play at the Kennedy Center in Washington DC on April 18 to honour the defenders of cultural heritage. Ninety musicians of one of the world's largest military bands, founded in 1820, will play in dress uniform traditional marches along with classical and modern pieces. The programme includes the national anthems of the United States and Italy, as well as  works by John Philip Sousa, Antonin Dvorak and Giacomo Puccini. The Italian Ambassador in Washington, Armando Varricchio, strongly urged "all culture lovers to join us in this international musical tribute to the defenders of the human heritage, in one of the most beautiful places of America." He added: "We are very grateful to the Kennedy Center for giving the Band of the Carabinieri the opportunity to perform in this beautiful Concert Hall, in a free event that is open to the public. The recent horrific attacks on our culture and on some of our core values - Paris, Tunis and Brussels, to name a few - remind us of the importance of defending culture and our way of life, in its entirety."

The concert is organised by the Italian Embassy in Washington in partnership with the Italian Institute of Culture, with the sponsorship of Fiat Chrysler Automobiles and Banca Intesa Sanpaolo. It is part of the "Protecting Our Heritage" programme supported by UNESCO and organised by the Washington network of European Union National Institutes for Culture (EUNIC). The programme was created under the Italian Presidency in 2016 to raise public awareness on the need to act against the growing threats posed to cultural heritage by wars, international terrorism, organised crime, climate change or simple neglect.

Additionally, the concert will be a recognition of the outstanding work of the Italian Carabinieri in promoting peace and protecting cultural heritage worldwide. The band is also part of the 'Cultural Blue Helmets', a programme that was launched with the signing of a Memorandum of Understanding (MoU) by Foreign Minister Paolo Gentiloni and by the Director General of UNESCO, Irina Bokova, in February. 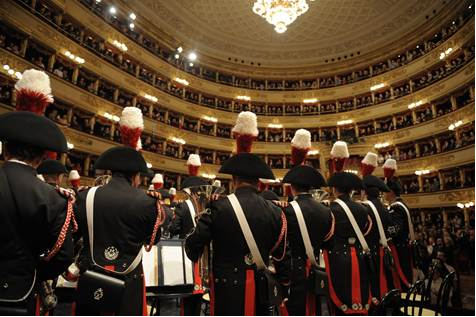