Tunisia: "Cinéma au Musée" of Sousse. Includes the screening of some of the "crown jewels" of the cinematheque

An unprecedented twinning will be launched from 26-30 August 2017 between the seventy-year-old Italian Cinematheque and the newly created Tunisian Cinematheque with the presentation of “The 70 years of the Milan Cinematheque” as part of the 3rd edition of the “Cinéma au Musée” (at the Sousse Archaeological Museum).

The event is co-organised by the Association Culturelle Afrique-Méditerrannée of Sousse and the Centre National du Cinéma et l'image of Tunis, with the sponsorship of the Italian Cultural Institute in Tunis, and is promoted as part of “Cineteca70”, the event celebrating the first 70 years of life of the Fondazione Cineteca Italiana (1947-2017), the first cinematheque established in Italy and founded by Luigi Comencini and Alberto Lattuada in 1947.

This exciting anniversary is marked by a large number of events, film festivals, exhibitions and museum displays, editorial initiatives, university cinematographic initiatives and conferences and will end at the end of 2017-beginning of 2018.

The Sousse event, in addition to the series of films dedicated to the 70th anniversary of the Milan Cinematheque, will also include a tribute to Jean Rouch for the 100th anniversary of his birth, and a homage to Merzak Allouache, one of Algeria’s most important and creative film-makers. The many guests at the Cinéma au Musée event will include Matteo Pavesi, the director of Fondazione Cineteca Italiana, and Francesca Badalini, musician and composer who will accompany several film screenings with live music, together with a Tunisian percussionist and clarinettist.

"The programme of films presented aims to offer an overview of some of the crown jewels that the Milan Cinematheque has restored and preserved over the years, first and foremost a film by one of the founders of the Cinematheque, La valigia dei sogni (1953), by Luigi Comencini, to pay tribute to a silent Italian comedy film,” explained Mohamed Challouf, from the Association Culturelle Afrique-Méditerrannée, and artistic advisor at the newly founded Cinematheque of Tunis. 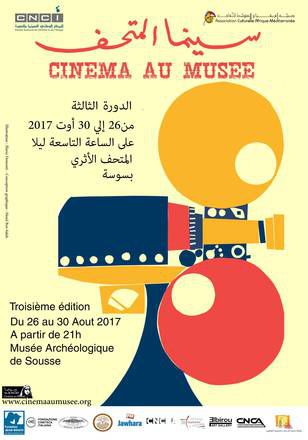