On Monday, 15 April, the Residence of Italian Ambassador Lorenzo Fanara in Tunis hosted an event dedicated to the Italian Research Day in the World promoted by the Italian Ministry of Education, University and Research in conjunction with the Ministry of Foreign Affairs and International Cooperation and with the Ministry of Health. The event was attended by the President of the Italian National Research Centre (CNR), Massimo Inguscio, the Tunisian Minister of Higher Education and Scientific Research, Slim Khalbous, and researchers from both countries.

Ambassador Fanara said: “To celebrate the Day, the great importance of which was also recalled by the President of the Republic, Sergio Mattarella, in Tunis we will be dealing with the issue of human-caused climate and environmental changes in the current epoch, which some quite correctly define as Anthropocene.” He went on: “Among the numerous signs of this impact, which span from the indiscriminate use of fossil fuels and chemical fertilizers to the global warming caused by greenhouse gas emissions, and the pollution provoked by microplastics, especially in the marine environment, which is the planet’s largest ecosystem, considering that oceans occupy two-thirds of its surface. It is a problem that is more global than any other, especially in terms of the Plastic Marine Litter (PML) phenomenon that now represents 75-80% of total solid marine litter.”

Ambassador Fanara explained: “This is the first time that Italian Research Day in the World is celebrated in Tunisia. Italy and Tunisia share the same ecosystem – the Mediterranean – and also the same history and future. The presence of the President of the CNR stands to remind us of the long-standing relationship between the Italian and Tunisian scientific communities. This Day not only represents an opportunity to celebrate Italy’s scientific talent in the world but it is also a lofty way of supporting the principle of the freedom of criticism and research against all forms of fanaticism and irresponsible behaviours against our Planet.”

President Inguscio emphasised that scientific research plays a key role in protecting the environment. He said: “The CNR’s research centres have long been committed to developing nano-, micro- and macro-plastic monitoring projects, developing innovative environmental detection methods and research projects to survey the effects of these pollutants on the marine and human environments, as well as developing new smart cleaning technologies. Among these, special mention should be made of the CLAIM project which envisages recovering energy from the plastic found in the sea through an innovative pyrolyzation system developed by an Italian company and the BLUMed project, which aims to assure sustainable development throughout the Mediterranean Basin.”

President Inguscio also highlighted “the importance of scientific dissemination, which is also carried out by the network of Italian scientific attachés and researchers in the world as an instrument to educate people to science and raise awareness on the need for a behavioural and cultural change. This is the only way in which we will be able to reverse the dangerous processes that are affecting the planet, the environment, the oceans and the life of people.”

Again as part of the agenda of the Italian Research Day in the World, the President of the CNR met with the Tunisian Minister of Higher Education and Scientific Research, Slim Khalbous, and with the Minister of Local Affairs and the Environment, Mokhtar Hammami, to explore cooperation prospects. 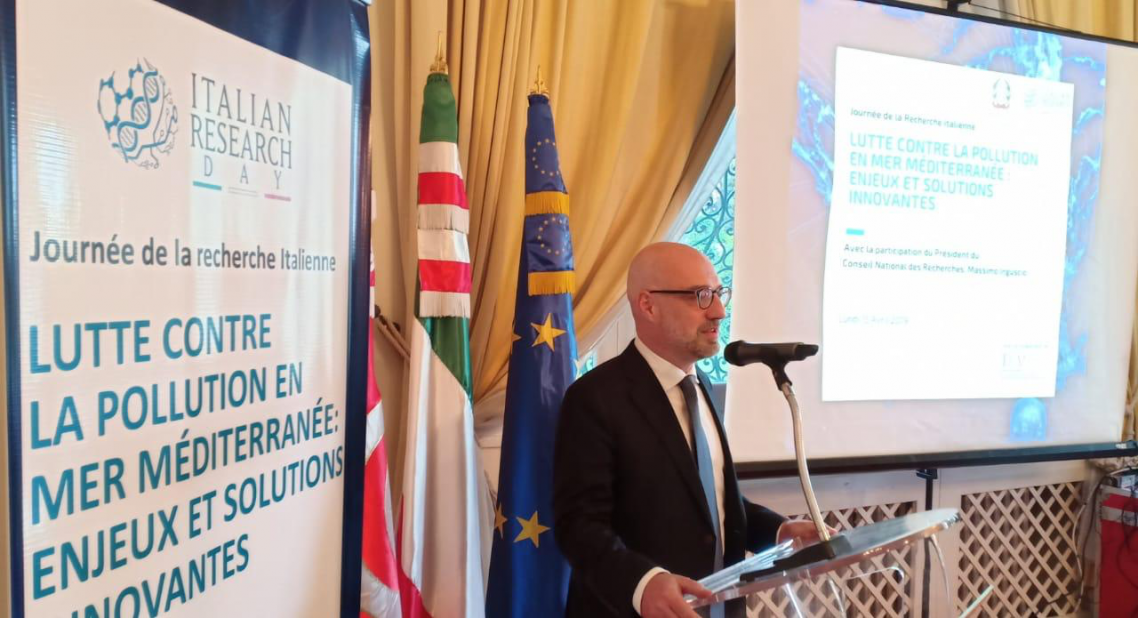