On Italian Research Day in the World 2019 and concomitantly with the message by the President of the Republic on 15 April 2019 (https://www.quirinale.it/elementi/27430), the Italian Embassy in Cairo promoted a series of activities focused on space science and satellite remote sensing in general. The star testimonial at the events that took place in Egypt from 8 to 11 April was astronaut Paolo Nespoli, who can boast a track record of three space missions, a 313-day permanence in space and the performance of up to 200 scientific experiments in his latest mission.

The initiatives were aimed at promoting Italian competence within Egypt’s scientific and sector-specific communities, above all to privilege the points of excellence of the “space” sector capable of strengthening existing bilateral relations.

Crowning the series of events, a lectio magistralis by astronaut Paolo Nespoli was held at Cairo’s Hilton Heliopolis Hotel on 11 April, which was attended by more than 250 people. The lecture was introduced by the Italian Ambassador, H.E. Giampaolo Cantini, by Prof. Mohamed Zahran, President of the Egyptian National Authority for Remote Sensing and Space Science (NARSS) and by Dr Fabrizio Zucchini in representation of the Italian Space Agency, ASI. The introductory remarks were followed by contributions by experts of eGeos (Gruppo Leonardo), ThalesAleniaSpazio and ASI, who illustrated the potential of the Italian space sector within the “space economy”. The moderator of the debate was journalist Ashraf Amin, director of the Department of Science at Al-Ahram, Egypt’s leading daily newspaper.

The “Eye on the Globe” exhibition was opened to close the event. It describes the potential of numerous satellite interferometry applications through the CosmoSkyMed constellation in which Italy is world leader. The exhibition will tour important Egyptian universities and research centres and is supplemented by a catalogue by the same name.

The series of events received a very positive media coverage. Paolo Nespoli was interviewed by several newspapers and by the Country’s most important talk-show presented by Mona el-Shazly, the full registration of which is available on  YouTube (https://www.youtube.com/watch?time_continue=271&v=N-m-8Yvemmg). 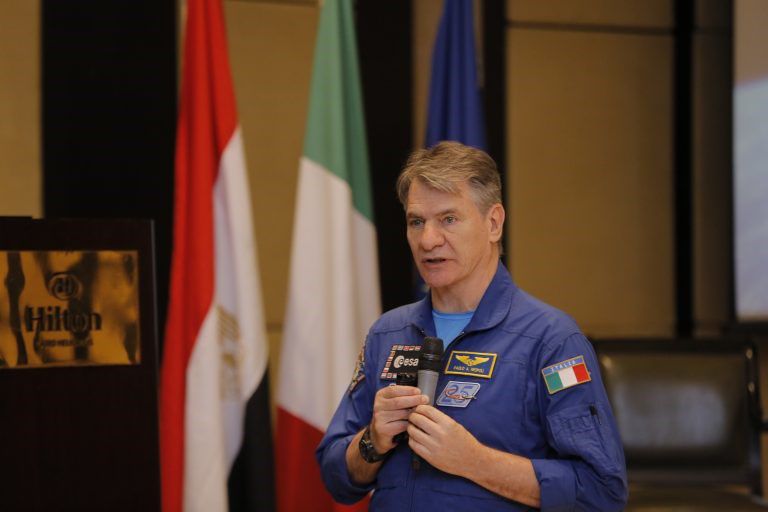