New agreements give strong impulse to Italy’s space sector and the opportunity to cooperate on new scientific and technological efforts to meet the challenge of space exploration, satellite communication, Earth observation and the management of natural disasters.

The President of ASI, Roberto Battiston, and the Director of UNOOSA, Simonetta Di Pippo, explained how Italy and the United Nations share the same vision of an open and shared space research, with a view to driving widespread knowledge and development, in line with the Global Development Agenda.

Co-organised by Italy and the UNOOSA with the support of the UN Committee on the Peaceful Use of Outer Space (COPUOS), the Open Universe workshop – on the fringes of which the two agreements were signed – was attended by nearly 90 experts from numerous Countries. The Workshop opened with remarks by Ambassador Maria Assunta Accili, the head of the Permanent Mission of Italy to International Organisations in Vienna, who recalled the role of the initiative in the perspective of the “history-making UNISPACE+50 event, which will convene in Vienna the top officials of the United Nations Member Countries in June 2018 to celebrate the 50th anniversary of UNISPACE I, the first Conference on Outer Space.”

The Agreements signed and the success of the ‘Open Universe’ event confirm the importance that Italy attributes to space diplomacy and to the position of the Italian space sector within the United Nations and of the international community, consolidating Italy’s points of excellence and growth 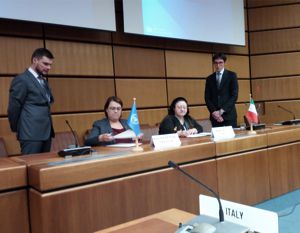