The Lebanese tour of the Stefano Maurizi-Luciano Biondini-Mohammed Abuzekry trio entitled “Middle Eastern Musical Dialogues” has just ended. It expressed a musical dialogue between the cultures of the West and of the Middle East. The tour was organised by the Italian Institute of Culture in Beirut together with several Lebanese partners. The project, born from an idea of pianist Stefano Maurizi, explores the sounds of the world music-new jazz genre by juxtaposing traditional Western musical instruments like the piano and the accordion and the Middle Eastern musical instrument par excellence, the oud or oriental lute. Most of the pieces on the programme were written by the trio. This musical experiment, which combines the art and poetry of traditional Mediterranean and jazz rhythms, recalls the history of the Mediterranean, so intricately intertwined with different cultures. 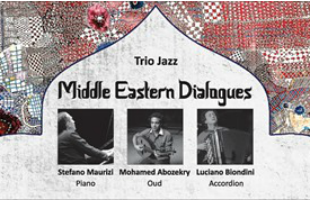