An art installation by Francesca Vivenza entitled ‘On the verge of’ will be displayed in the garden of the Italian Consulate General in Toronto until 10 October. The work was commissioned by the Italian Cultural Institute (IIC) for ‘Castello Italia’, the event held at Casa Loma on 4 June to celebrate the Italian National Day. The installation resembles a catapult or mangonel, a wooden structure used in war against fortifications at least since 399 BC, according to historian Diodoro Siculo. On the tip of the beam there is a little model of a house, the symbol of stability and traditional values. In this case, its precarious stability suggests that the house sits on the border of a given space and risks being launched into the air. The artist presents her work as a threatening catapult but at the same time a big toy, raising two counter-opposed concepts: the position of the house implies instability or an act of force but, by contrast, the possibility of being launched into the air stimulates the viewer to free himself of such fears. The artist thus presents a visual equation of the contradictory nature of human desire: the struggle between assimilation and marginality, between complicity and evasion. Francesca Vivenza lives and works in Toronto and her art is made up of composite materials. Her works include installations in specific places and artistic books, which she calls Experimental Itineraries. Her work focuses on themes such as travel, conquest and displacement and challenges the commonly accepted values of individual identity, such as one’s home, homeland and mother tongue. 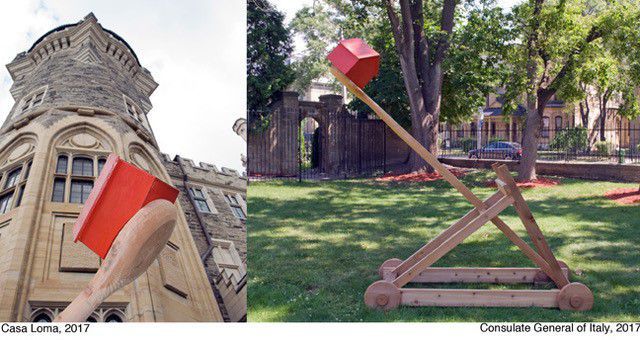