On stage with Leonardo in Southeast Asia

A tour of the Italian Renaissance kicked off in Southeast Asia (Bangkok, Singapore and Hong Kong) thanks to the cooperation between the Ministry of Foreign Affairs and International Cooperation and the Italian Embassies and Cultural Institutes.  The theatre will be the stage for a cultural strategy in which Italy plays the leading role. The project was presented by Massimiliano Finazzer Flory, who has been touring the world with his works since 2011. The show entitled “BEING Leonardo da Vinci. An impossible interview” illustrates the universal vision of the Italian Renaissance genius, unveiling the painter, scientist and inventor, together with his secrets, his methods, his passions and the advice of a lifetime. Through the ‘impossible interview’ format, Finazzer Flory attempts to disclose the thought and universal vision of this extraordinary genius of the Italian Renaissance. 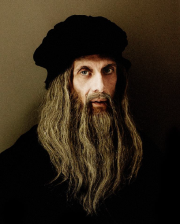 “BEING Leonardo da Vinci an impossibleinterview”