In the evening of 7 November, the Ny Carlsberg Glyptotek in Copenhagen was the backdrop to the concert by the Cremona Quartet organised by the Italian Embassy and Cultural Institute in Copenhagen with the cooperation of the Embassy of Japan in Denmark and in partnership with the Ansaldo STS-Hitachi Group, GCF (Generale Costruzioni Ferroviarie SpA) and Metroselskabet-Copenaghen Metro (in attendance was the Deputy Director, Anne-Grethe Foss).

Since 2000, the year of its foundation, the Cremona Quartet has been one of the most dynamic chamber music groups on the international scene. Regularly called to perform in the most important musical events in Europe, America and Far East, the Quartet has been awarded full recognition by critics and audiences for its high-level artistic performances. The Cremona Quartet was also appointed “Ambassador” of the “Friends of Stradivarius” international project: Cristiano GAULCO, violin, Paolo ANDREOLI, violin, Simone GRAMAGLIA, viola, Giovanni SCAGLIONE, cello, performed with the world-famous "Paganini Quartet" made by Antonio Stradivari, on loan from the Nippon Music Foundation.

The "Paganini Quartet" is one of the unique sets of instruments known to have been made by Antonio Stradivari (1644-1737), which once belonged to Niccolò Paganini (1782-1840), the legendary Genoese virtuoso.  The Nippon Music Foundation purchased the Quartet from the Corcoran Gallery of Arts of Washington, D.C. in 1994 and gives it on loan every year, in compliance with the will of the donor, Madame Anna E. Clark.

At the presence of more than 400 guests – Danish authorities and personalities, members of the Diplomatic Corps, representatives of the world of business and culture – the Quartet performed pieces by Luigi Boccherini, Verdi and Beethoven. The group closed the evening with a piece by Ennio Morricone, in line with the focus on the cinema of the 17th Week of Italian Language in the World – an event under the High Patronage of the President of the Republic – which represented the best way of concluding the Copenhagen event. 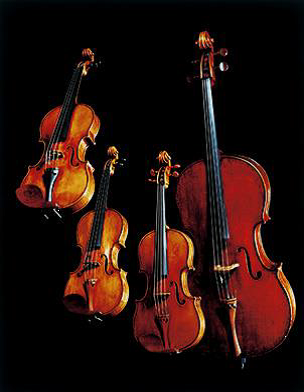