The exhibition «Leonardo in France. The Master and his Pupils 500 years after crossing the Alps. 1516-2016» was opened on 21 September at the Italian Embassy in Paris at the presence of the Italian Minister for Cultural Heritage and Activities and Tourism, Dario Franceschini, and of the French Minister of Culture and Communications, Audrey Azoulay. The exhibition was organised under the High Patronage of the Presidents of the Republic of Italy and France. Admission to the exhibition, which is open from 11 a.m. to 5 p.m. until 20 November, is free of charge.

The event, organised in partnership with the Louvre Museum and with Italy’s major museums, falls within the framework of the actions of Italy’s cultural diplomacy for the promotion of its artistic heritage and is an expression of the commitment to valorise Italy’s and France’s common culture at European level.

The exhibition celebrates the anniversary of the world-renowned Master’s arrival in France and offers to the French and international public the most emblematic works by Leonardo and his pupils.

The exhibition juxtaposes works by Leonardo da Vinci and by his closest apprentices (Francesco Melzi, who followed him to France, and Gian Giacomo Caprotti, better known as Salai, who went to Amboise during Leonardo’s permanence in France), and displays Leonardo’s masterpieces “Head of a Woman”, also known as “La Scapigliata”, from the Gallery of Parma (in the Pilotta Monumental Complex), in an itinerary showing references to the three paintings that Leonardo brought to France (the Mona Lisa, St. John the Baptist, St. Anne).

In addition, on the basis of unpublished studies by the Louvre and original documents, the exhibition retraces Leonardo’s steps from Rome to Amboise, crossing the Alps through the Moncenisio Pass. 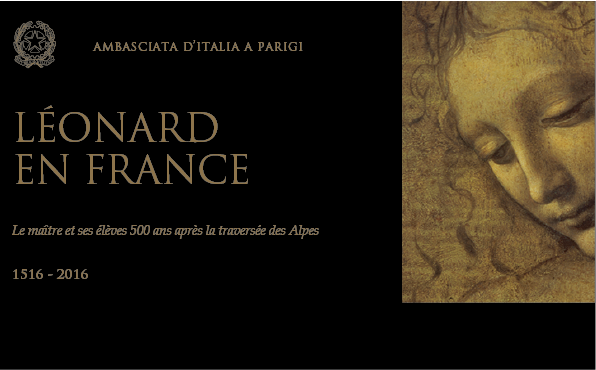