Minister of Foreign Affairs Paolo Gentiloni participated today in the ministerial segment of the “Major Economies Forum on Energy and Climate”(MEF), an informal dialogue established in 2009 upon an initiative by the United States to advance efforts against climate changes. The Forum, which took place on the sidelines of the 71st General Debate of UNGA, was chaired by U.S. Secretary of State John Kerry.

In his address, Minister Gentiloni spoke of the contribution Italy gave to the finalization of the Paris Agreement last December, stating that "the Italian government supports the EU strategy to  decarbonise Europe's economy by 2050."

Moreover, Minister Gentiloni confirmed Italy's commitment "to keep a priority focus on climate issues in view of the G7 Italian Presidency,"  highlighting that Rome "is determined to push fast-track ratification of the Paris Agreement." 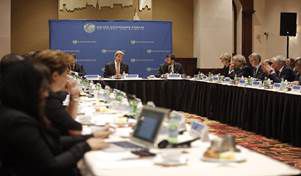