Italy, Cultures, Mediterranean in JEDDAH” - Conference “Future Environmental and Biological scenarios between the Mediterranean and the Red Sea

On 14 May, the Italian Consulate General in Jeddah organised a conference entitled “Future Environmental and Biological scenarios between the Mediterranean and the Red Sea”, supported by an impressive interactive exhibition on biodiversity in the Red Sea, organised in association with the Italian scientific community at the King Abdullah University for Science and Technology (KAUST): a futuristic university campus north of Jeddah, which already counts more than 100 Italians between professors, researchers and students.

The Conference was attended by Daniele Daffonchio, Professor of Bioscience at the KAUST, Giorgio Bavestrello, Professor of Zoology at the University of Genoa, and Dr. Folco Giomi, Research Fellow in Zoology at the University of Padua. The Mediterranean and the Red Sea present significant environmental and biological differences but also important analogies and represent a continuum with unique features. For example, the opening of the Suez Canal and the rise in temperature in the Mediterranean are ushering into this Sea tropical species typical of the Red Sea. In this perspective, the Red Sea is considered to be a model to study in view of the future environmental and biological scenarios in the Mediterranean in the light of the ongoing climate change.

The event was a great success among the public of over 60 scholars who, at the end of the Conference, attended the presentation of the "Study in Italy" website by the staff of the Consulate General. 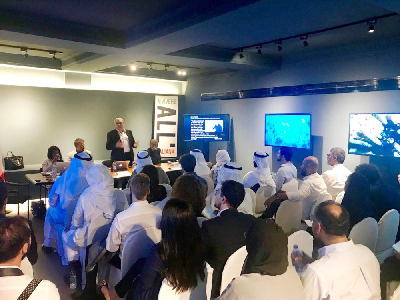