The Arch of Titus and the Menorah, the seven-branched lamp, are the elements that make up the logo of the Anti-Semitism Conference, which Minister Alfano presented on Monday. The conference, which is to take place in Rome on 29 January, will be the first event organized by the Italian OSCE Chairmanship to testify to the importance given to the fight against racism, intolerance and discrimination. The conference aims to become a platform of dialogue, in line with the principles of the OSCE –“one the major  environments for global multilateralism in which there is no room for discrimination and intolerance," the Minister underlined.

In the afternoon, Minister  Alfano addressed the Senate Defense and Foreign Affairs Committees, alongside Defense Minister Roberta Pinotti,  to illustrate the reorganization of Italian missions abroad. Minister Alfano highlighted the importance of the future mission in Niger for Italy’s “security and for the fight against  illegal trafficking, including human trafficking.” He then recalled his mission to Africa, which included Niger, Senegal and Guinea Conakry, and enhancing Italy’s diplomatic presence in the continent, in addition to the 40-million euro increase in the Africa Fund in 2017 compared to the previous year, which testifies to the strategic importance the African continent represents for Italy. 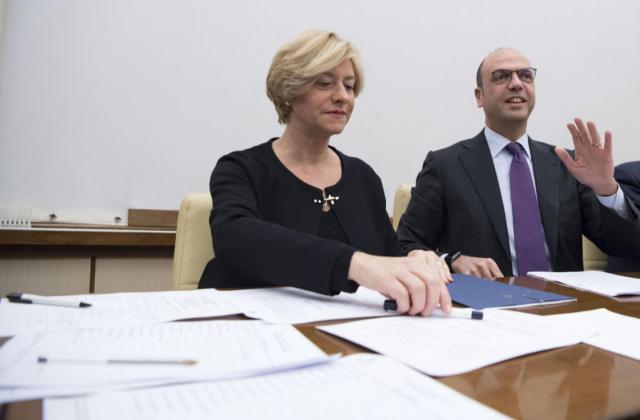 On Tuesday, precisely to bring Italy's support to another African country,  Minister Alfano flew to Tunis where he met with the top-ranking government officials of a country he defined “an exemplary model for the Mediterranean area.” The Minister reaffirmed that Italy will continue to support Tunisia also in European fora already at the European Foreign Affairs Ministers conference of 22 January, calling for more support to the Tunisian government in overcoming the current difficulties. 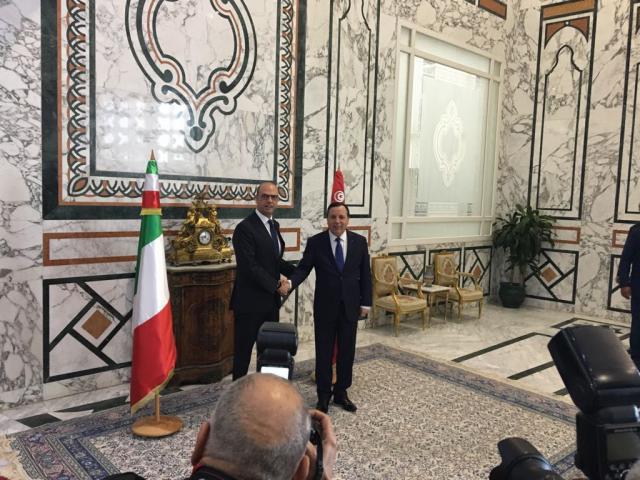 Upon his return to Rome, Minister Alfano, in his capacity as Chairman-in-Office of OSCE, condemned the murder of the leader of Oliver Ivanovic, the leader of the Serbian minority in Kossovo, calling for a prompt investigation to identify the culprits. Mr Alfano, together with Secretary GeneralThomas Greminger, launched an appeal for calm among all the parties involved.

Furthermore, the Minister reported on the Vancouver Foreign Ministers' Meeting on Security and Stability on the Korean Peninsula, where Italy presented the results obtained in 2017, both within the framework of the G7 Presidency and as designated head of the UN Sanctions Committee.  The meeting brought “a message of cohesion and solidarity”, said the Minister. He added: “The resumption of contacts between North and South Korea might open new opportunities. The Vancouver meeting confirmed that the common goal remains a full, verifiable and irreversible denuclearization of the peninsula.”

The last appointment of the day was his meeting with the Austrian Foreign Minister, Karin Kneissl. Among the topics of the bilateral relations, the Minister mentioned the Brenner Railway Tunnel which is due to become the longest railway tunnel in the world in 2026. The talks also focused on the issue of granting Austrian citizenship to the German and Ladino-speaking Alto Adige community that the new Austrian government included among  its legislature’s agreements. Minister Alfano reaffirmed that there will be no unilateral decisions and that Italy’s stance is based on the De Gasperi-Gruber Agreement, “ an example of a successful agreement”. 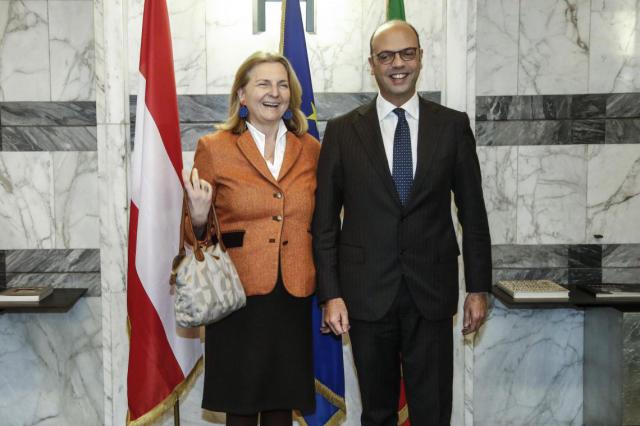 On Wednesday, the Minister visited another European country. In Bucharest, Romania, he held meetings with President Klaus Iohannis, his colleague Foreign Minister Teodor Malescanu and the Italian community living and working in the country –“a strategic hub for the Balkans, Eastern Europe and the Black Sea.” “Ever since Romania joined the European Union, we have been sharing a common roof under which we will continue to enhance our bilateral relations,” said Minister Alfano, recalling the 12.95 billion euro trade volumes and the 23,000 Italian businesses operating in Romania. The minister also mentioned the commonalities between the two peoples, the similarities between the two languages and what he defined “a historic friendship.” 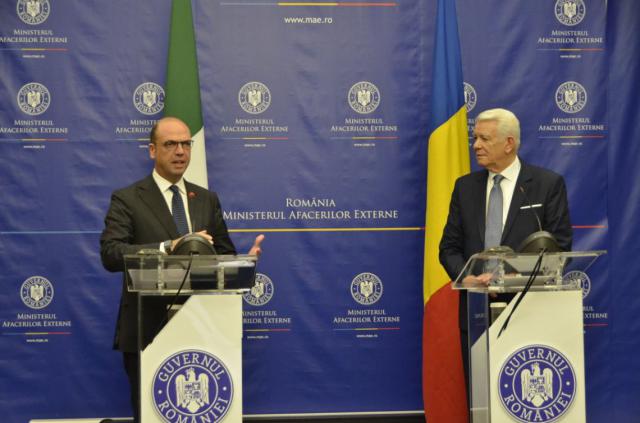 On Thursday, many students and professors welcomed Minister Alfano  in the Farnesina’s Aldo Moro conference hall  for the opening ceremony of the ‘Diplomacy Education’ initiative –a project which envisages the adoption of the students of high school classes by approximately sixty foreign embassies in Italy, with the aim offering Italian youth an opportunity to come in contact first-handedly with the cultures of foreign countries and, as the Minister said, to “look upwards” in order to enjoy a broader perspective. The event gave Minister Alfano the opportunity to recall the pillars supporting Italy's foreign policy over the last 70 years, despite the instability of governments and the many ministers who have been in office. Among these, the Minister underscored the construction of Europe, which he advised the youngsters to defend at a time when many are trying to destroy it. 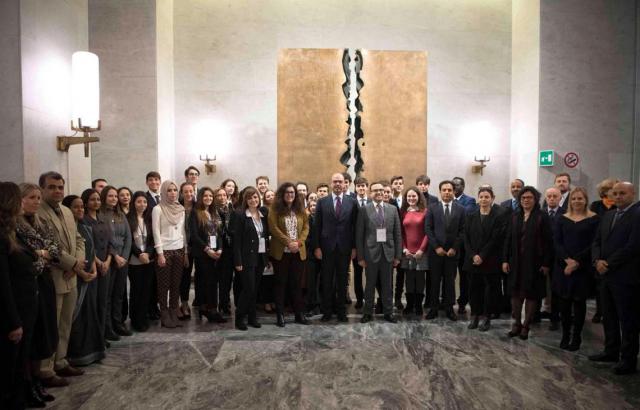 After meeting the students, Minister Alfano attended the third Coordinating Committee of Italian and Croatian Ministers and the  signing of a joint declaration. The Croatian Deputy Prime Minister and Foreign Minister, Marija Pejcinovic Buric, thanked Minister Alfano for the “substantial and concrete support” to  Croatia’s request to enter the Schengen Area, to which the Italian minister replied by saying that “this is part of a joint Italian and Croatian mutual support strategy." He added: “We are supporting each other in many battlefields. You can always rely on Italy.” Minister Alfano defined this a ‘fruitful’ meeting, as it was attended by the ministers  of the environment, economic development, agricultural policies, infrastructures, the interior, education and cultural heritage. The topics discussed included migration, research and innovation and the growth of economic cooperation. Another issue on the agenda was devoted to the Croatian and Italian minority communities. Mr Alfano also highlighted “the friendly relations which the two countries continue to enjoy”. The Croatian Foreign Minister defined “minorities as a bridge joining our two peoples who enjoy a good context and rights, both in Italy and in Croatia.” 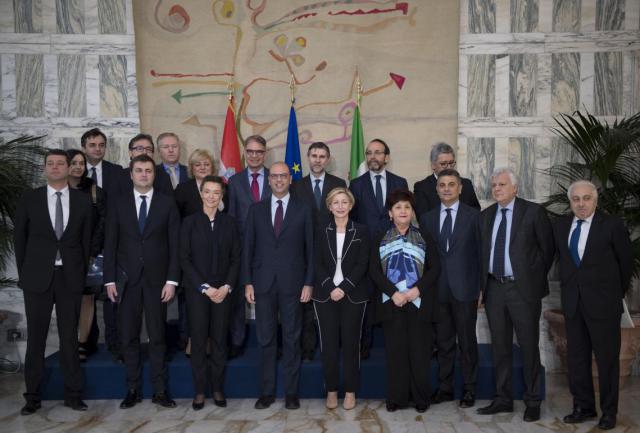 Passing from Croatia to Liechtenstein, the Minister met with his colleague Aurelia Frick and highlighted the “excellent bilateral relations”, the “sharing of fundamental values” and the "great satisfaction" for the coming into effect of the bilateral agreement on the exchange of tax information, thus ensuring an adequate degree of transparency following the lifting of bank secrecy.

The Minister’s last appointment of the day was that with the leader of the Syrian opposition, Nasser Hariri. Minister Alfano appreciated his “balanced and constructive approach”. Both ministers identified the United Nations-led Geneva Process  as “the only way to achieve a credible political solution of the conflict.”

Friday morning began with a statement welcoming “India’s admission in the Australia Group”,  acknowledging the country as a major producer and exporter of biological and chemical material and technology, which will “foster the regime’s non-proliferation mission and the global non-proliferation architecture”. Minister Alfano added: “The Italian Government joined all the other members of the Australia Group in acknowledging the efforts accomplished by the Government of India to fully align its legal system and administrative practices to the guidelines and common list of the Australia Group.”

“Today we have approved documents that are key to providing Italian Cooperation with shared strategic orientations, in line with the major innovations on the international scenario,” said Minister Alfano after the meeting of the Interministerial Committee for Development Cooperation, held at Palazzo Chigi and chaired by Prime Minister Paolo Gentiloni. The three-year programme with the 2017-2019 guidelines is the major strategic policy reference for the entire Italian cooperation system, which is the main pillar of Italy’s government actions and of Italy’s outreach abroad.

On the same day, Minister Alfano traveled to the United Arab Emirates (UAE), to attend the third session of the bilateral Strategic Dialogue. On Saturday, the Jumeirah at Etihad Towers Hotel hosted the Minister's first meeting with Italian enterprises, followed by talks with the Crown Prince of Abu Dhabi, Sheikh Mohammed bin Zayed Al Nahyan, who also participated in the third session of the Strategic Dialogue. “Economic diplomacy is a priority for us. We are supporting our enterprises so that they will better grasp all the opportunities the UAE may offer,” said Minister Alfano. Another important moment of his visit was the signing of the contract for Italy’s participation in the EXPO Dubai 2020. “Italy will work closely with the Emirati friends to assure the complete success of EXPO 2020, “ the Minister added. The minister’s visit to Abu Dhabi also aimed to finalize an interpretative memorandum to clear any internal regulatory hurdle which might have hampered Italy’s ratification of the 2015 Extradition Treaty between our country and the United Arab Emirates up to now.

That evening, Mr  Alfano departed from Abu Dhabi heading to Algiers, where he met with his Algerian colleague Abdelkader Messahel. The Plenary Session of the 5+5 Dialogue, “one of the major and most traditional for a for regional dialogue” on cooperation and integration between the two shores of the Mediterranean Sea was held on Sunday. One of the panels was chaired by Italy and discussed themes such as local crises and security. “In this historic moment, we have come at a crucial crossroads: either the Mediterranean resumes its role as a place of cultural aggregation, civilisation, trade and investment; or it can plunge into a miasm of clashes, terror, social distress and instability. The international community will have to do its best to promote the former scenario –not the latter. Bringing peace, security, sustainable development in a region bridging Europe to Africa and Asia, would be extremely beneficial for all. For our generation and for the future ones.”