The Minister’s week began on Monday at the EU Council of Ministers meeting in Brussels with a “weighty agenda that included Libya, peace negotiations in the Middle East, and a meeting with Palestinian President Abu Mazen”.  Minister Alfano also asked the EU to support the “young Tunisian democracy, a model for the Mediterranean” and informed colleagues on his upcoming diplomatic mission to Ukraine in his capacity as current chairperson-in-office of the OSCE. His two goals are to “consolidate the ceasefire and help facilitate political dialogue”. The Minister commented from Brussels on Michele Nicoletti’s election as President of the Parliamentary Assembly of the Council of Europe, viewing it as “confirmation of Italy’s consistent commitment to human rights”.   Alfano's thoughts also went out to the victims of the terrorist attack on the Hotel Intercontinental in Kabul, which he strongly condemned by saying that “we firmly condemn violence and terrorism”. 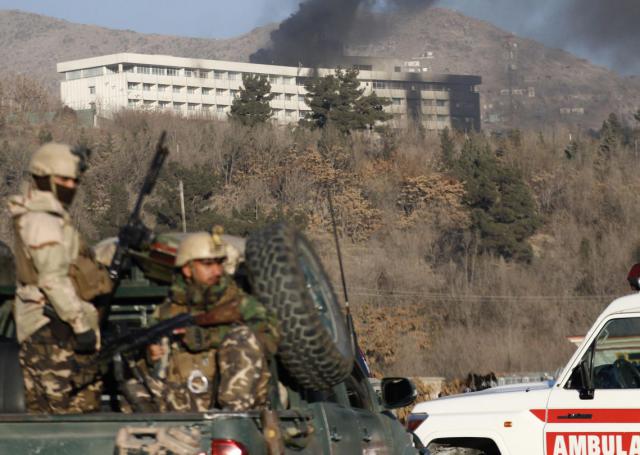 From the EU, he went to Paris on Tuesday to represent Italy at a meeting with 24 other countries forming a Partnership against Impunity for the Use of Chemical Weapons, following the Russian UN Security Council veto on prolonging international checks in Syria.  “It is very important for us now to launch a strong political message against impunity for the use of chemical weapons. We are determined to forcefully respond to the terrible international crimes carried out with chemical weapons by both national and non-national perpetrators” said Alfano. The Minister said that this priority was agreed upon by both Italy and the USA in the meeting with his American colleague Rex Tillerson. The Minister also stated that “on the one hand, breaches must be rapidly punished as a deterrent to future violations. On the other hand, we need to ensure that the direct effect of these sanctions is to prevent proliferation programmes and not worsen the humanitarian situation”. With respect to the attacks by Turkey on a Kurdish enclave in Syria, which he discussed with his colleague Mevlut Cavusoglu, Alfano said that “both international rights and people must always be protected”. 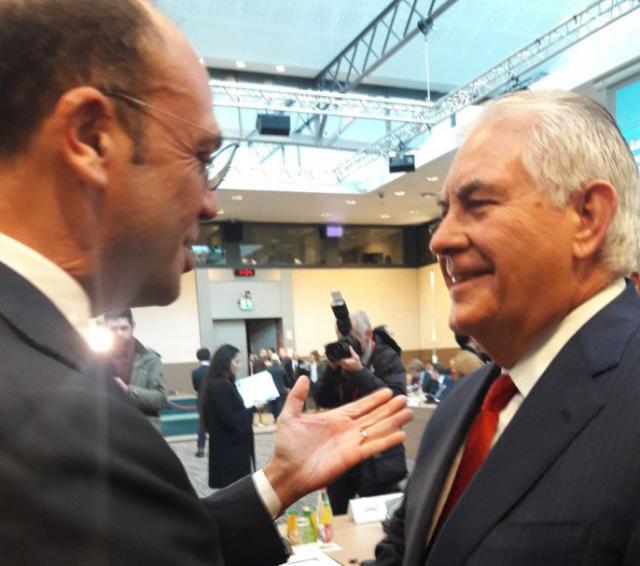 On Wednesday, the National Conference of Development Cooperation opened at the Auditorium Parco della Musica in Rome. The event is significant in the sector, but was interrupted by the tragic news of a new attack against the Save the Children Offices in Jalalabad, Afghanistan. Alfano said “this fills our hearts with sadness and reminds us of the need for security for those who work in the front line, and not behind desks.  The key message to take away from the conference is the ‘need to help one another’, since each development project also involves co-development in which both parties grow and get the opportunity to improve,” continued the Minister. He then reasserted how much Italy had done to manage the migrant situation, combining “solidarity and security”. “Africa is in our hearts and our future” he said, referring also to our ambassadors who can help others, using cooperation to “show the world the kind, generous nature of Italy”. 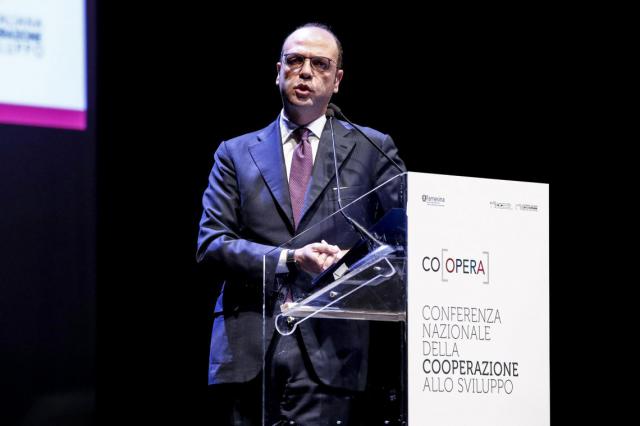 The Minister took part in a meeting with the ambassadors of EU countries in Rome to mark the beginning of the EU presidency of Bulgaria: a moment of reflection on the need to provide a united front to the challenges posed by populism, which is “driven by two engines: the economic crisis and youth unemployment, and security and migration”.  In the wake of a meeting held at the Farnesina, Alfano then dealt with an issue dating back to the Second World War when eight masterpieces, including works by Titian, Tintoretto, Carpaccio and Veneziano, were stolen, with some unlawfully acquired by the Nazi party official, Hermann Goering in 1942. They are now on exhibition at the National Museum of Serbia. The Minister called the pictures “eight prisoners of war”. He added “we are confident that the Serbian authorities, with whom we have already had fruitful contact in light of our historical friendship, are ready to work with us in a true spirit of collaboration”.

On Thursday, Alfano addressed the second day of the Conference on cooperation expressing “his firm condemnation” of the two deadly car bombs that went off in Benghazi, Libya, and his “deep concern and dismay at the news of summary executions in the city following the attack”. “Italy supports the Libyan people and authorities in their fight against terrorism and against all forms of violence that penalise peace and stability” he said, repeating “his full support” for the UN special envoy Ghassam Salamè for “his efforts to push forward the political process and national reconciliation”. Returning to the Ministry of Foreign Affairs and International Cooperation, the Minister met his Kosovo counterpart Behgjet Pacolli and reviewed bilateral relations, which were referred to as “very positive” with room for further improvement. In his position as chairperson-in-office of the OSCE, Alfano also believed it to be “essential for Pristina and Belgrade to resume dialogue, starting from implementation of existing agreements”.

The final part of the day was devoted to presentation of Italy’s participation in Expo Dubai 2020 for which work has begun on coordinating the promotion of the country.  “We will attend this event with the Expo Milan experience at our shoulders.“ Alfano said, “The concept that we wish to present in Dubai is research and innovation” since there is “a country narrative that takes account of tradition and our projection towards innovation”. He added that Expo “would be a unique opportunity for dialogue between countries all over the world, especially since the Dubai Expo is the first one organised in an Arab country”. 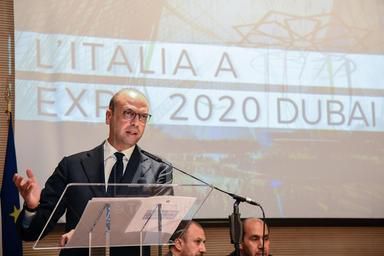 On Friday, he presented the Conference for Combatting anti-Semitism to be held in Rome on Monday, 29, the first event organised in his capacity as chairperson-in-office of the OSCE. “We need a powerful vaccine to combat anti-Semitism and racism and discrimination,” said the Minister who presented the event along with the President of the Union of Italian Jewish Communities, Noemi Di Segni. He said, “Intolerance is worrying, but so is indifference in the face of increasing episodes of anti-Semitism, since silence always favours the aggressor and never the victim. Italy was one of the first countries to establish the International Holocaust Remembrance Day”. 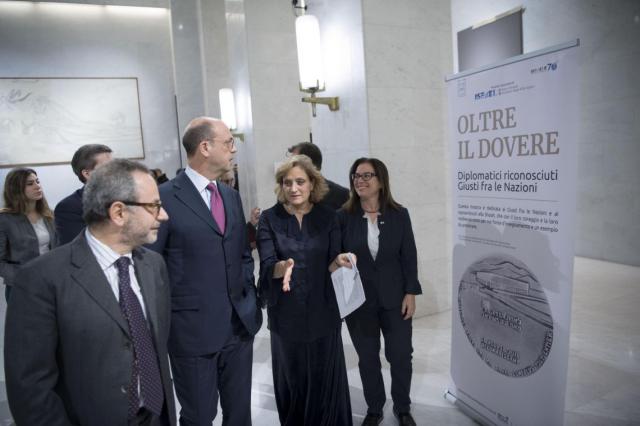 Finally, the Minister met his South Korean counterpart, Kang Kyung-wha, at the Ministry of Foreign Affairs and International Cooperation. This year marks the 134th anniversary of bilateral relations between the two countries. Alfano remarked on the “excellent cooperation, especially in the economic area, due in part to the free trade agreement between the EU and South Korea”. He said that this agreement is “a model of fair cooperation and openness” at a time when protectionist policies are increasing.  Moving onto the area of international politics, the Minister said that “the meeting between high level delegations of the two Koreas and restoration of a military communication channel aimed at minimising the risk of involuntary escalation of the crisis were positive signs. So too was the announcement that North Korea would participate in the Winter Olympics in Pyeongchang. We hope that this will act as a prelude to a real change of direction by the North Korean regime”.

On Saturday, Alfano referred once again to the dramatic situation in Afghanistan, where a kamikaze killed 40 people in Kabul. “This is further proof of the barbarity and cowardice of terrorism” he said, adding “we send our strongest condemnation from Italy and express our solidarity with the families of the victims. We give our support to the Afghan government and its people”.