Malta – Literature, the environment and the territory: Malta pays a tribute to Giorgio Bassani

An event paying tribute to Giorgio Bassani on the 100th anniversary of this birth will be held at 6:30 p.m. on Thursday, 13 October, in the Auditorium of the Italian Cultural Institute in La Valletta. The evening’s programme includes a conference promoted in partnership with the Giorgio Bassani Foundation, Italia Nostra and Din l-Art Helwa. Giorgio Bassani, the Emilia-born writer and poet, left an indelible mark on the history of Italian literature in his masterpiece “Il Giardino dei Finzi Contini” (“The Garden of the Finzi-Continis”). He wrote: “Nature and history, in Italy, are so closely inter-related that it would be impossible to separate them. The territory, in its natural configuration, is practically non-existent; over time, and throughout the country, Nature has been reshaped by Man or at least marked by his work.” The Italian Cultural Institute in La Valletta celebrates the writer with a three-member discussion panel entitled “Giorgio Bassani e la coscienza per la salvaguardia e la conservazione dell’ambiente e del territorio tra Italia e Malta” (“Giorgio Bassani and his Awareness of the Need to Protect and Conserve the Environment and Territory of Italy and Malta”). The event will be attended by Paola Bassani, the writer’s daughter and the president of the Giorgio Bassani Foundation. The other speakers will be Maria Rosaria Iacono, vice president of Italia Nostra and Simone Mizzi, former president of the Maltese Association Din l-Art Ħelwa. By referring to Bassani’s role as president of Italia Nostra from 1965 to 1980, the event intends to commemorate Bassani’s commitment in favour of the protection of the environment and of the territory. Indeed, Bassani was one of the founders of the Italia Nostra Association (together with Elena Croce, Pietro Paolo Trompeo, Desideria Pasolini Dall'Onda, Luigi Magnani, Hubert Howard, Filippo Caracciolo and Umberto Zanotti Bianco), whose Statutes not only promote the protection of Italy’s natural heritage but also of its artistic heritage, which are considered sacred insofar as they form part of the human heritage of the whole world. 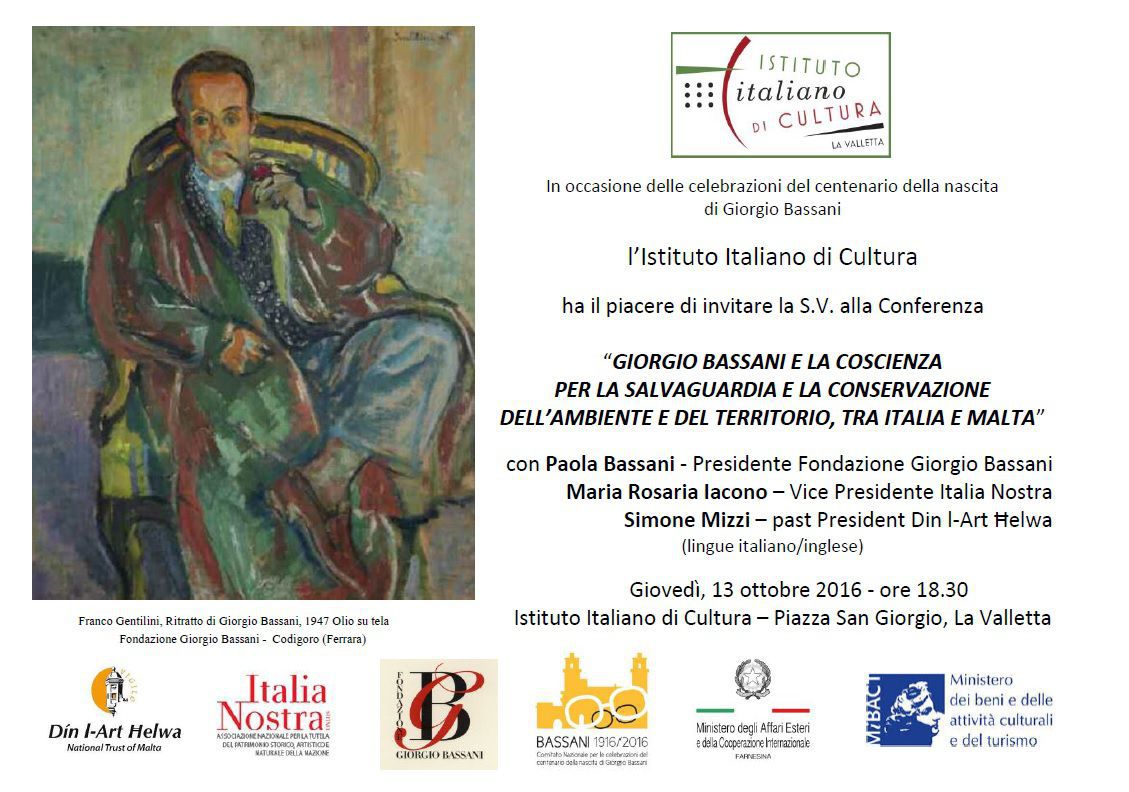