Message by Minister Di Maio on the occasion of the Presentation of the 4th Action Plan implementing the “Women, Peace and Security” Agenda organised by Rome’s “La Sapienza” University

Promoting women's empowerment and the gender perspective is a priority of Italian foreign policy. Our country has guaranteed its immediate support to Resolution 1325, unanimously adopted in 2000 by the Security Council and establishing the Women, Peace and Security (WPS) Agenda, and aims to take a leading role in all major international fora to promote its full and effective implementation.

We are committed to promoting women's participation in international peace and mediation processes, also by contributing significant resources. The recent approval of the Fourth National Action Plan on Women, Peace and Security and, at the same time, the allocation of 3 million euros over the next three years by the Italian Parliament to support its implementation, confirm this commitment. The previous National Action Plan had also benefited from a similar financial effort by Parliament: 4 million Euros over a period of 4 years, to support projects developed by various civil society organisations and aimed at achieving the implementation of Resolution 1325.

We can proudly say that we are at the forefront of this concerted effort, within the international community, being one of the few countries that dedicate public funding to the implementation of their National Action Plan.

Italy, in particular, has deepened the link between the Women, Peace and Security Agenda and mediation, as a means of promoting a substantial involvement of women in peace processes, being aware of the role they can play in ensuring that post-conflict agreements and societies are more inclusive and sustainable. In this spirit, in October 2017, as part of our mandate in the Security Council and the G7 Presidency, Italy set up a network of mediators and mediation experts in the Mediterranean area (Mediterranean Women Mediators Network, MWMN), which combines three Italian priorities: the Mediterranean, support to preventive diplomacy, and the need to ensure the effective participation of women in conflict prevention and resolution processes.

The Network, which comprises over 60 women of different backgrounds and ages, from 21 countries in the enlarged Mediterranean region, with experience or knowledge in the fields of mediation, conflict resolution, civil and political rights, has gradually developed and effectively become an international model, also thanks to synergies with other similar organisations.

However, we need to further intensity the efforts in implementing the Women, Peace and Security Agenda. Despite recent progress, women continue to be severely under-represented in peace processes. In this spirit, we are determined to confirm our country's leading role in the implementation of the Agenda and will spare no effort to promote women's participation in peace and mediation processes and, therefore, in the political, social and economic life of their countries in the future. 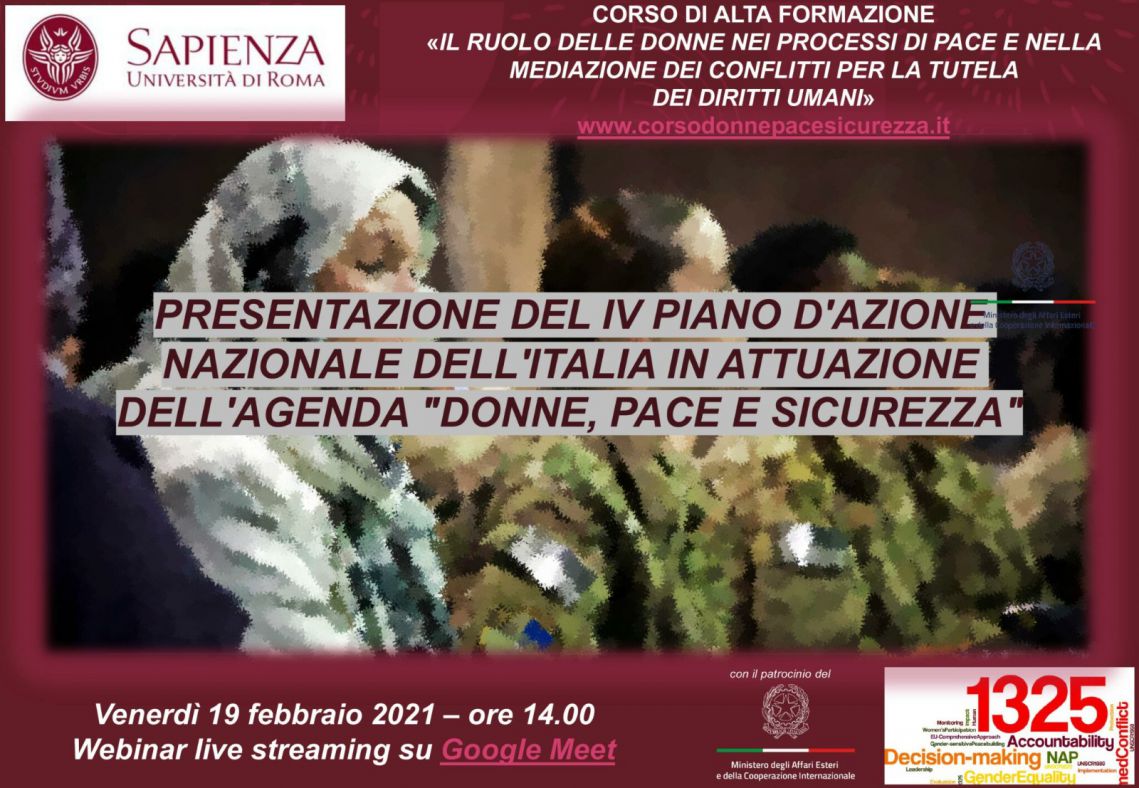 Message by Minister Di Maio on the occasion of the Presentation of the 4th Action Plan implementing the “Women, Peace and Security” Agenda organised by Rome’s “La Sapienza” University
41293
Valuta questo sito