The Montreal Museum of Fine Arts will host the exhibition called “Pompeii” from Saturday, February 6 to September 5. The initiative was organised thanks to a collaboration between the Italian Institute of Culture and the Royal Ontario Museum in Toronto, which hosted the exhibition from June 13, 2015 to January 3 last. It is the first time an exhibition on Pompeii and Hercolaneum is held in Montréal. Founded in the 6th century BC, the two Roman cities were destroyed in the spectacular eruption of the Vesuvius in 79 AD. Buried and perfectly preserved under several metres of volcanic ash, they were forgotten for over fifteen centuries.
Their rediscovery in the 18th century deeply influenced European art, from Neoclassicism to Romanticism. In the words of German writer Johann Wolfgang von Goethe, who captured Pompeii’s timeless splendour in his travel chronicle “Italian Journey”: “On Sunday we were in Pompeii. Many a calamity has happened in this world, but never one that has caused so much entertainment to posterity as this one. I scarcely know of anything that is more interesting. The houses are small and close together, but within they are all most exquisitely painted. The gate of the city is remarkable, with the tombs close to it. The tomb of a priestess, a semicircular bench, with a stone back, on which was the inscription cut in large characters. Over the back you have a sight of the sea and the setting sun – a glorious spot, worthy of the beautiful idea.” 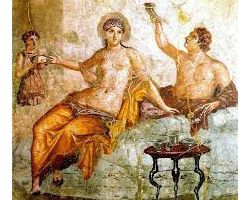