NATO - The North Atlantic Council on visit in Kuwait

Italy’s Permanent Representative to NATO, Ambassador Claudio Bisogniero, travelled to Kuwait on 23 and 24 January, with the members of the Atlantic Council and the Secretary General of the Atlantic Alliance, Jens Stoltenberg, for the inauguration of the NATO Istanbul Cooperation Initiative Regional Centre (ICI), under the partnership uniting the Atlantic Alliance, Kuwait, the UAE, Bahrain and Qatar since 2004. The mission represented a major and visible sign of attention for the country and the region and confirmed, at the level of political dialogue and communication, the effort to relaunch NATO in the area as announced at the Warsaw Summit. The effort also aims to enhance the projection of stability and of a joint response to the threats to common security and stability. During the meeting’s official proceedings following the inauguration, Ambassador Bisogniero, who represents Italy (a NATO Contact Point in Kuwait), recalled the progress made in the cooperation with the Alliance and highlighted the role played by Kuwait at a regional level. Moreover, the diplomat announced Italy’s intention to actively participate in the work of the Centre. The Ambassador highlighted the possible synergies between the Centre in Kuwait, the NATO Defence College (NDC) in Rome and the JFC Command in Naples, and the Centre’s capacity to serve as an incubator to develop fruitful new collaborations in the areas of cyber and maritime crime, Science for Peace, and situational awareness, thus contributing to the long-term stability of the region, as underlined by Mr. Stoltenberg. 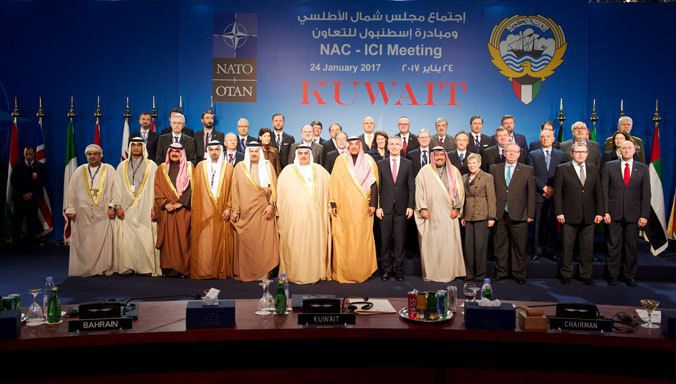