On June 7, 2017, the Farnesina held the fourteenth meeting of the Joint Commission on Scientific and Technological Cooperation between Italy and Japan. The two countries celebrated the 150th anniversary of their diplomatic relations in 2016, and now see their scientific and technological  dialogue as one of the pillars of their bilateral relations.

The meeting, organised within the framework of the Italy-Japan Intergovernmental Agreement of Scientific and Technological Cooperation signed in Tokyo on October 7, 1988, was chaired by Fabrizio Nicoletti, Director for Innovation and Research at the Ministry of Foreign Affairs and Internatinal Cooperation (MAECI), and by Takeshi Nakane, Ambassador for Science and Technology at the Ministry of Foreign Affairs of Japan.

The meeting was attended by high level representatives of the ministries, as well as funding and research institutions from the two countries.

The progress being made in scientific and technological cooperation was illustrated during the meeting, with a focus on space research, environment, energy, agriculture, geophysics, vulcanology, nutrition sciences and health. Participants exchanged views on innovation, research policies and international cooperation tools. Special attention was devoted to illustrating the Italian National Research Programme 2015-2020 and the Japanese 5th Science and Technology Basic Plan, which focused on the aspects of the 'Society 5.0' project within its contents.

With reference to the cooperation plans on science, technology and innovation, Italian and Japanese representatives discussed the research activities which were initiated by the Executive Protocol on Scientific and Technological Cooperation 2017-2019 and the projects pursued by Italian and Japanese research institutions, appreciating the high level and quality of the research carried out. At the end of their work, the participants decided that the next Joint Commission will take place in Japan. The date will be established by diplomatic channels. 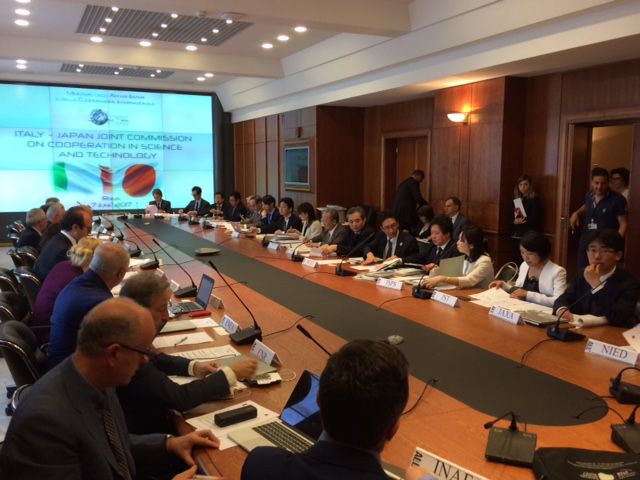