Senator Monica Cirinnà will be at the Italian Consulate in London next 14 November to participate in a conference entitled "Ieri. Oggi. Domani" ("Yesterday. Today. Tomorrow") which will debate the issue of civil partnerships and the rights of LGBTIs. The Italian law on civil partnerships and cohabitations passed this year bears the Senator's name. The initiative has been organised by the Italian Consulate in partnership with Wake Up Italia - London, the association of Italian LGBTIs residing in the capital city. Italian journalist Claudio Rossi Marcelli will chair the conference , and the discussion panel will include Maria Federica Moscati (professor at Sussex University and a lawyer of Rete Lenford – Advocacy for the rights of LGBTI couples), Massimiliano Mazzanti (Italian Consul General in London) and Roberto Sormani (president of Wake Up Italia - London). "It will be an important opportunity to make the voice of Italian citizens residing abroad  be heard by Italian policy-makers, who way too often are detached from their effective needs," said the spokespersons of Wake Up Italia. "The Cirinnà Act finally filled in a gap in the human rights issue of same-sex couples even if the road towards an equal treatment of LGBTIs is still long and challenging, as the name of the event highlights. During the debate, Prof Moscati and Senator Cirinnà will respectively illustrate the ways of tackling this need for equality in the Courts of Justice and in Parliament. Compared to other countries, both inside and outside Europe, Italy is considerably lagging behind in guaranteeing the rights of LGBTIs, and the citizens residing abroad therefore play an important role in bringing about changes in our Country. The enthusiasm with which the Consulate General sponsored this Conference is a reassuring and encouraging sign in this direction,” they said. 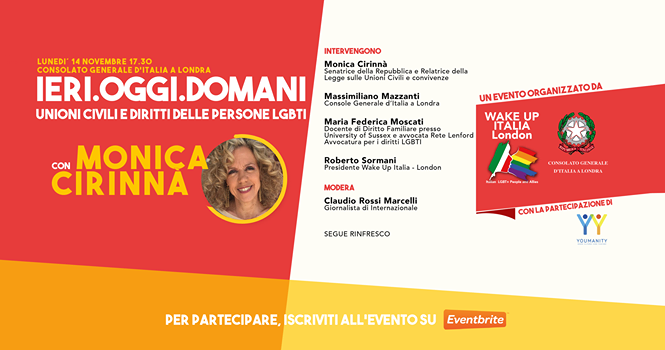