Four events with musicologist and composer Luciano Chessa will be held between January 21 and 27 in San Francisco. Luciano Chessa is one of the most interesting and creative minds in the world of music in the Bay Area. Currently professor of composition at the San Francisco Conservatory, Chessa works as a composer, musician, musicologist and conductor, combining classical rigour with more experimental forms of contemporary music. His music has been performed throughout Europe, Australia and the United States. The first event will be held on Thursday, January 21 with a lecture on futurist Luigi Russolo entitled "Music the Dead Can Hear: Theosophical Presences in Luigi Russolo's Art of Noises", during which Chessa will discuss the "noisemakers" invented by the painter and musician from 1913 onwards, tracing their origin to the noise-making mechanisms designed by Leonardo da Vinci. The event was organised by the Centre for New Music, the Strand Theatre, the Leonardo da Vinci Society, the Italian American Museum, and The Lab, in partnership with the Italian Cultural Institute in San Francisco. 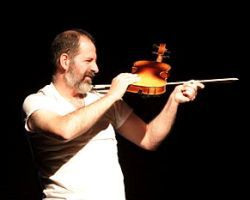