Tunisia - Quirinale's bust of Hannibal on display in Bardo Museum

The renowned marble bust of Hannibal, owned by Italy's Quirinale Palace and considered to be the most credible portrait supposedly of the Carthaginian commander, will be on display at the Bardo National Museum in Tunis from Friday, May 24, till June 30, as part of the "Hannibal in Carthage" exhibition. To mark the occasion, the Italian Institute of Culture in Tunis, in collaboration with the Tunisian president’s office and other local authorities, has organised a lecture by Giovanni Brizzi, Professor of Roman History at the University of Bologna and one of the world’s leading experts on Hannibal.

Over time, the bust has become the reference point for Hannibal's effigy in history books and popular culture. Tunisia's 5 dinar note, for example, bears an image of the bust. A recent study by a group of British researchers also rekindled interest for the heroic feats of Carthage's most famous military leader. The bust will return to Italy for the "Annibale. Un viaggio" (Hannibal: A voyage) exhibition, which will be held from August 2 to January 15, 2017 at the castle of Barletta in the Puglia region. 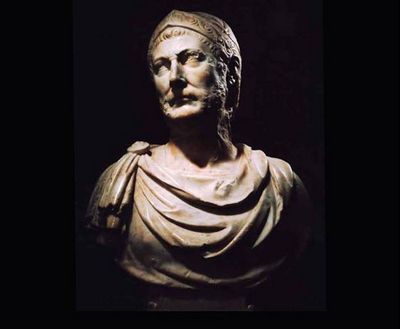