Valentina Tafuni was born in Acquaviva delle Fonti, a town in the Murgia of Bari, on 20/07/1992. She discovered at a noticeably young age her interest in writing, politics, and the defence of social and civil rights. In 2011 she obtained her high school diploma at the "Ricciotto Canudo" of Gioia del Colle, after five years characterised, inside and outside the school walls, by her commitment to the issues of legality, active citizenship and the battle against architectural barriers. A determination that made her deserve the "Guido Dal Prà" scholarship from Fratres for her scholastic and personal merits, and for "her ability to broaden her gaze to the universe of solidarity and social issues".

To satisfy her passion for the humanities, she decided to enrol in the Faculty of Letters of the University of Bari "Aldo Moro", with a curriculum in Literary culture of the modern and contemporary age. She graduated in February 2016 discussing a three-year thesis in Modern and Contemporary Literature with the title "Between the doubt of the winners and the inexpressible conditions of the losers. Pietro Ingrao poet", in which she outlines the militant poetics of the former President of the Chamber of Deputies. In the drafting of his work, she makes use of the documents kept in the Ingrao Archive of the State Reform Centre and the Archive of the Senate. The decision to probe such an unpublished theme stems from her interest in combining literary passion and the political soul, not only regarding the subject of her work.

During the university years, her activism intensified at different levels, in the city but also at the provincial and regional level. In 2015 she was selected for a full-time internship at the Alliance of Socialists and Democrats at the European Parliament. She works between Brussels and Strasbourg to support the political group within the then newly established parliamentary working group on the fight against extremism, nationalism, and xenophobia. She conducts studies on counter-narrative to terrorism and deradicalization; it is in the organisation of the conference "United against hate and fear", on the fight against hate speech. She also follows the work of the LIBE Commission (Committee on Civil Liberties, Justice and Home Affairs) of the Community body, with a specific focus on migration, human rights, and the rights of people with disabilities.

She returned to Italy and decided to enrol in the master's degree course in International Studies at the University of Naples "L'Orientale" to broaden her field of expertise and research to European and non-European level. In the spring of 2018, she was selected for academic merits by the Ministry of Foreign Affairs and International Cooperation and by the CRUI Foundation for a three-month internship in New York at the Permanent Representation of Italy to the United Nations. In this critical position, she collaborated with the diplomatic corps involved in the Third Commission, working mainly on human rights and humanitarian issues agenda. Two events followed: the XI Conference of States Parties to the Convention on the Rights of Persons with Disabilities (COP11 CRPD) and the annual ECOSOC Humanitarian Affairs Segment. She also broadened her knowledge in combating gender-based violence, protection of vulnerable persons in conflict zones, and disability law. In October 2019, she obtained a master's degree a published a thesis in International Organization with the title "The Convention on the Rights of Persons with Disabilities: its transposition in some recent UN instruments". The thesis deals with the level of implementation of the CRPD within the Agenda 2030 for Sustainable Development, the Global Compact and the Sendai Framework, as well as future challenges for the adequate and full protection of the rights of persons with disabilities in contexts of migration, conflict, climate change and environmental disasters.

From 2016 to 2018, for three consecutive years, she had the opportunity to refine its expertise in advocacy, lobbying and online and "on foot" awareness campaigns. She was selected as Young Italian Ambassador for the non-profit organisation "ONE Campaign", co-founded by Bono Vox and Bill Gates, among others. The campaign gathers and mobilises nine million members worldwide. Its purpose is increasing the attention of policymakers at various levels - local, national, and international - towards the fight against extreme poverty, especially in developing countries, and preventable diseases (malaria, tuberculosis, and AIDS). Thanks to this experience she was able to meet representatives of the European Parliament, the Chamber of Deputies, the Senate, the Ministry of Foreign Affairs and International Cooperation. She gave an essential contribution to the development of citizens' awareness through the organisation of conferences and meetings in the streets, in school classrooms, in places of sharing.

In parallel with political and advocacy activism, she is also involved in student representation during his university years. Specifically, it takes part in the University Union, dealing - both in Naples and at the national level - mainly with foreign countries, educational inclusion, gender equality and the right to study.

In March 2019 she participated, on behalf of the UDU, in the 37th European Student Conference which took place in Timisoara. In June 2019 she was chosen as the keynote speaker of the celebrations of the twentieth anniversary of the Bologna Process, the process of international reform of the higher education systems of the European Union, which took place in the Two Towers city. This is how, within the event "Bologna Process beyond 2020", she is among the speakers of the panel "Providing Leadership for Sustainable Development, the Role of Higher Education", speaking on the role of academics in achieving SDGs, together with a colleague of the German student union and Hilligie Van't Land, Secretary-General of the International Association of Universities. In 2020 her contribution will be included in a publication by Bologna University Press.

She has developed skills in the field of euro design with a specific training course completed in 2018. Over the she has become fluent in English and French, consolidated by experience abroad, and a has acquired good knowledge of Spanish. She writes articles for local newspapers of Puglia region.

In May 2019 she was among the speakers at TEDx Barletta, with a speech on overcoming personal and social limits, on empowerment and the fight against inequalities. She participates in several events as a speaker on the issues of the rights of people with disabilities, intersectionality, gender equality, global citizenship education and the rights of children and adolescents.

From April 2019 to April 2020 she participated as a volunteer of the National Civil Service at the Municipality of Naples in the project "Melodia - Memoria e lotta dei diritti della donna" (Melody - Memory and struggle of women's rights). Her aim is educating the younger generations to gender equality and women and fragile subjects’ empowerment. She decided to start from the most challenging areas of the city. Within this juncture, she collaborated until November 2019 with the Department of Citizenship Rights and Social Cohesion (dealing with migrants, refugees, homeless people, victims of trafficking, decentralised cooperation). Until the end of the project, then, she supported the Department of Confiscated Assets, focusing on the social destination of the goods taken from organised crime, for the benefit of minorities and vulnerable people. 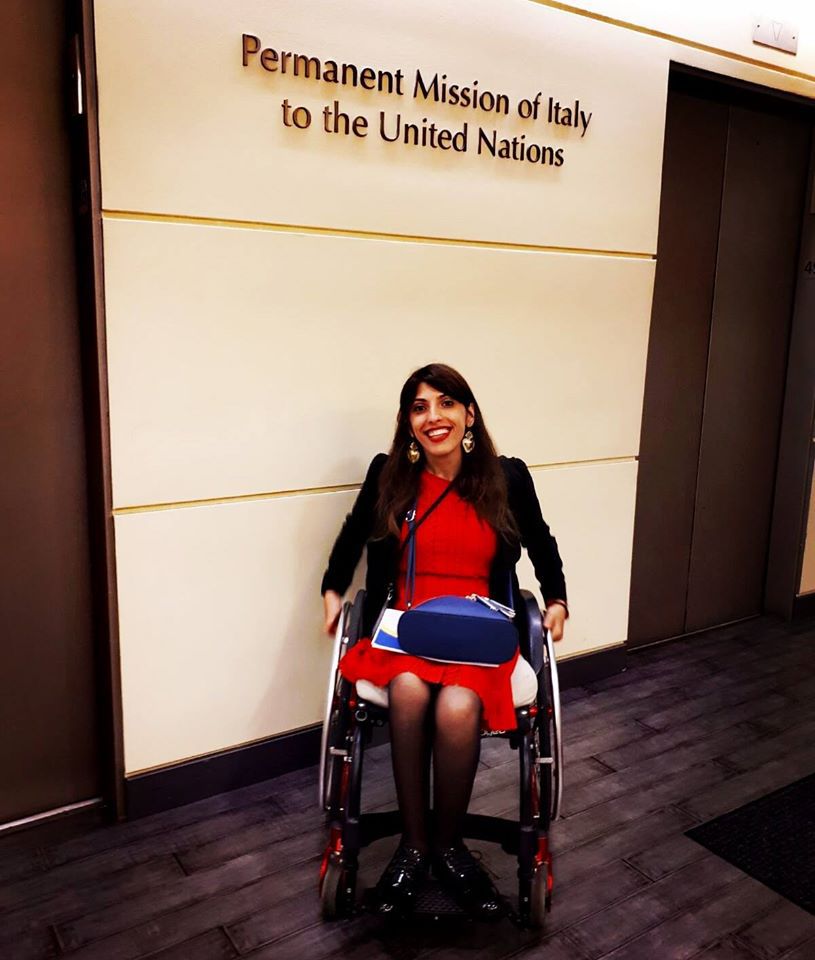