The words of sociologist Milena Gammaitoni: “In the field of sociology, building reality with its different identities, both individual and collective, can also be achieved through artistic experiences that, seen as ‘finite provinces of meaning’, synthesise, recall and evoke images, sensations and collective ideas of how we were, are and could become,” could very well describe Morena Antonucci’s latest art project “The New Light of Emigration”. The art project is hosted and promoted by the Association of Abruzzesi in Wolfsburg (chaired by Cav. Rocco Artale) with the Arbeit und Leben of Lower Saxony, an institution for continuing education in maintenance of the German federation of trade unions, and the Emigration Office at the Volkswagen offices in Wolfsburg. The new project is presented two years after the artist’s one-woman show “Majas Wolf” was held at the Italian Institute of Culture in the German city. The opening event, sponsored by the Italian Consular Agency in Wolfsburg, is scheduled at 4 p.m. on April 4 at Wolfsburg’s Bürgerhalle exhibition space and will be attended by the Councillor for Culture, Thomas Muth, who promoted the initiative.  “The New Light of Emigration” will run until April 22 and is the fruit of the collaboration between sociologist Vittorio Di Salvatore and the sensitivity of the artist who, focusing on the central role played by Italian migration, re-elaborates and rewrites social themes as an autobiographical experience based on her own life as the daughter of Italian emigrants.

“The New Light of Emigration”

Morena Antonucci arrived in Germany after a decades-long painting experience in Abruzzo, where she engaged in redefining what contemporary art meant for her. Her artistic project “The New Light of Emigration” integrates and supplements the documental/photographic show called “Good Luck” (“Buona fortuna”), which has been presented on several occasions by the Cultural Association Abruzzesi of Wolfsburg. The artist presents a single large-size 28 square metres artwork: an acrylic painting on canvas comprising 14 modules (canvases) on an equal number of panels which make up the “Good Luck” exhibition. The canvases will be displayed on a wooden elliptical scaffolding especially manufactured for the show by Volkswagen’s Auto Museum in Wolfsburg, which covers a surface of approximately 50 square metres and has a height of three metres. The artist intends to launch a positive message on the new phenomenon of contemporary migration by focusing her attention on the “light” that differentiates the old generation of Italian migrants from contemporary migrants. The artist sees the new generation of migrants, living in a fully computerised and globalised society, as destined to have a rosier future than past generations. 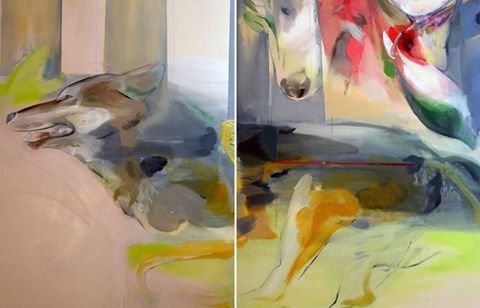