This afternoon at the Farnesina, the Minister of Foreign Affairs and International Cooperation, Enzo Moavero Milanesi, received the Secretary General of NATO, Jens Stoltenberg, who is on an official visit to Rome, where he is scheduled to meet with the Prime Minister and the Minister of Defence tomorrow.

The very cordial talk focused on a broad exchange of views on the major issues facing the Alliance, also with a view to the NATO Summit of the Heads of State and Government in Brussels next 11-12 July, at which Minister Moavero will accompany the Prime Minister.

With respect to NATO’s position on security, Minister Moavero underscored the importance for Italy that the Brussels Summit reaffirm the Alliance’s 360-degree approach to security as well as the prospected stabilisation of the South flank, which is the source of great challenges for the Alliance, starting with terrorism. Mr Stoltenberg reassured the Italian foreign minister on this point, saying that NATO’s engagement in the South constitutes a key component of its strategic adjustment.

The two officials also agreed on the importance of maintaining open the dialogue between NATO and Russia. Minister Moavero especially expressed his appreciation for the meeting of the “NATO-Russia Council” (NRC) recently held in Brussels. Referring to the meeting, Minister Moavero reaffirmed his endorsement of the “dual track” policy launched by NATO Leaders at the 2016 Warsaw Summit, envisaging more frequent meetings of the NRC and widening – if possible – the subjects of debate, without neglecting the dialogue that exists also between high-ranking military officers.

Another issue addressed in the meeting concerned NATO-EU cooperation, in the shared hope that the July Summit might adopt a joint NATO-EU declaration of great political depth saying, as Minister Moavero suggested, that the two Organizations face the same security challenges: in a prospect of complementarity and not of competition, a quantum leap in the European Union’s security and defence capacity would also reinforce NATO’s.

Focusing on one of the points on the Summit’s agenda – achieving a greater equilibrium in the “burden sharing” between NATO Members States by 2024 in terms of the resources allocated for defence spending at national level – Minister Moavero recalled that Italy is the fifth-largest contributor to NATO’s budget and has made a great effort in terms of men, means, and resources in NATO operations such as the ones in Afghanistan and in Kosovo, just to mention the largest. Minister Moavero also pointed out that in the past couple of years our defence spending has reversed the negative trend of the past and that this growth trend is consolidating.

Turning to the enlargement of the NATO, Minister Moavero recalled that the recent accession of Montenegro confirms the validity of this approach, the principles of which need to be hopefully consolidated in the future Euro-Atlantic integration process.

Lastly, Minister Moavero invited the Secretary General to attend Rome MED 2018 – Mediterranean Dialogues, which is scheduled to be held in Rome from 22 to 24 November, expressing the hope that he will be to fit it into his agenda. 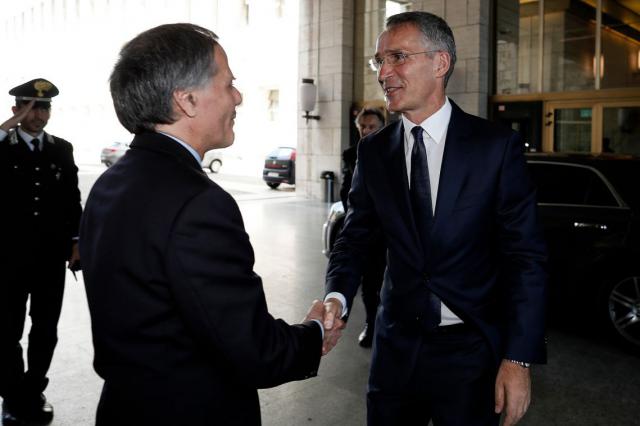