At the request of Foreign Minister Paolo Gentiloni, the Secretary General of the Ministry of Foreign Affairs, Michele Valensise, urgently summoned the Ambassador of the Arab Republic of Egypt, Amr Mostafa Kamal Helmy, this morning to express the Italian Government’s dismay following the death of young Giulio Regeni in Cairo.

Mr Valensise stressed that Italy expects full cooperation from the Egyptian authorities at all levels in view of the exceptional gravity of what happened to the Italian student and of the traditionally close and friendly relations between the two countries.

In addition to requesting full disclosure regarding this case – added the Secretary General – Italy reiterated its call for the Egyptian authorities to immediately launch a joint investigation with the involvement of Italian experts. We also request – concluded Mr Valensise – that the body of the young Giulio Regeni be returned to Italy as soon as possible.

On behalf of his country, Mr Helmy expressed his deepest condolences for the death of Mr Regeni and assured that Egypt would fully cooperate in identifying the people responsible for this criminal act. 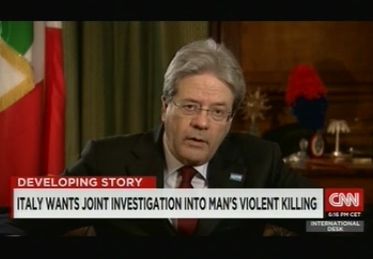