To date, Italy is the only Country  that has twice won the CERN international competition, known as “BeamLine for  schools - BL4S”​. The competition is open to teams of high-school students from across the world. The winning teams is given the opportunity to conduct a scientific experiment at the prestigious research centre of the European  Organization for Nuclear Research in Geneva, Switzerland. The National Institute for Nuclear Physics (INFN), the Ministry of Foreign Affairs and International Cooperation (MAECI) and the Ministry of Education, University and Research (MIUR) have invited the two winning teams to attend "La scienza vincente della scuola italiana", a special event during which they will be presented with an award by the Director General of CERN, Fabiola Gianotti. The two teams come from the Liceo Scientifico 'Leonardo da Vinci' of Florence, the winner of the 2015 competition, and the Liceo scientifico ' Temistocle Calzecchi Onesti' of Fermo, the winner of the 2017 competition. The event, which will be hosted at the Farnesina, will be attended by the Undersecretary of State for Foreign  Affairs, Benedetto Della Vedova, the Principal  Director for Innovation and Research, Fabrizio Nicoletti, the President of the National Institute for Nuclear Physics, Fernando Ferroni, and the Head of the Department for the Educational and Training System of the Ministry of Education, University and Research, Rosa De Pasquale. The European  Organization for Nuclear Research (CERN) first launched the international competition “BeamLine for  schools - BL4S”​ in 2014. It is an opportunities for teams of students from all over the world to perform their own experiment at the Geneva-based centre using a CERN accelerator beam. Teams are led by a tutor - a teacher, whose support is essential for every student. INFN has always fostered the participation of Italian students in the BL4S competition. It also has to be pointed out that the number of Italian teams has always been much larger than those of any other Country. Two Italian teams, from Florence in 2015 and from Fermo in 2017, respectively, won the competition and were then able to perform their own experiments in the CERN laboratories. In Italy, the competition forms part of a learning and working system (Alternanza Scuola-Lavoro) developed by the Ministry of Education, University and Research (MIUR).Stefano Gagliani, a member of the LEO4G of the Liceo Scientifico "Leonardo da Vinci" of Florence, said: "Being invited to present our project after more than three years is proof of the fact that the BL4S was much more than a ten-day experience. It continues to be a key-feature in our personal lives, which we would like to share with as many people as possible, especially students."Letizia Mainardi, a member of the TCO-ASA team of the Liceo Scientifico  'Temistocle Calzecchi Onesti' of Fermo, said: "My team-mates and I have been very happy to participate in this fantastic experience, which has opened so many doors to knowledge. We have learnt to work in a team, never to take anything for granted and to commit ourselves to the fullest in order to fulfil our goal. In the twelve days we spent at CERN, we delved into the experiment with all our energy, both while we were in the experimental area and in our room where we analysed the data. Finally, when our experiment succeeded, the fatigue we felt for the hard work was cancelled out by a profound, unforgettable moment of joy we shared among ourselves and with our tutor." "Two classes have been able to conduct their own experiments at CERN, being the winners of an international competition to which hundreds of contestants also participated. This is a great sign of the quality of the teaching of physics in our Country, which ensures a positive future for good science. It also gives great pleasure to see the INFN research themes divulged in the school system," said the President of the National Institute for Nuclear Physics, Fernando Ferroni."I wish to express my sincerest congratulations to the students and their tutors, who won two editions of this international competition for Italy. We are proud of their creativity, scientific knowledge and passion. They have achieved a remarkable result, which is in line with the tradition of excellence for the school of physics in our Country. Every year Italy gives CERN a major contribution both in terms of funds and extraordinary scientists. I hope that the positive experience these students have had, and which represents an example of the scientific diplomacy which the Ministry of Foreign Affairs and International Cooperation considers as a priority area, may strengthen their motivation and necessary enthusiasm to continue ahead with their studies and become great Italian scientists of the future," said the Undersecretary of State for Foreign  Affairs, Benedetto Della Vedova."It is yet another confirmation that our school, when it opens its door to the world of work and research, can enhance the value of our students and teachers, creating products of absolute excellence. Initiatives such as these are fundamental, because they help students learn to design, make connections and think in a critical manner. CERN, which I wish to thank, has given our students through "Beamline for Schools" an opportunity to develop their competencies and aspirations in the field of science. I believe that this experience of a dual training (a learning and working system - Alternanza Scuola Lavoro), has enriched our students. It has allowed them to grow both from the point of view of relations and knowledge as well as to discover new professional scenarios. The BL4S has a major educational value, and because of it, I would like to stress that we must engage to a great extent in promoting a "Good study and work system". We must offer our students the possibility of measuring up to any profession they may fancy in the future, proving that the Italian school system is very much alive and capable of generating excellence, of which we can be proud, " said the Undersecretary of State at the Ministry of  Education, University and Research, Gabriele Toccafondi. 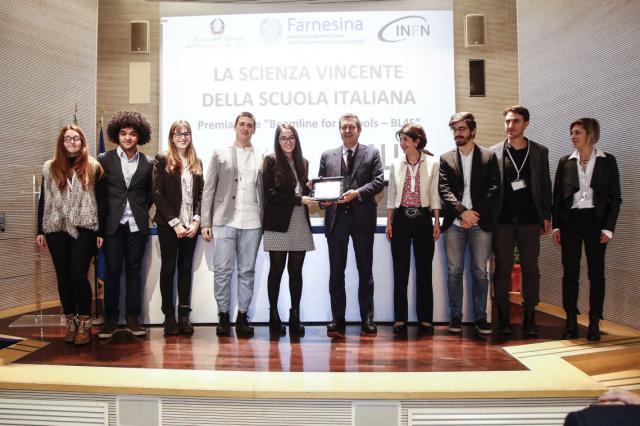