Italian diplomacy in the face of the tragedy that befell Italian and European Jews in the period 1938-43 is the central theme of the exhibition ‘Duty Only. Beyond Duty - Italian diplomacy in the face of the persecution of the Jews (1938-43)’ curated by Sara Berger and Marcello Pezzetti, with archival expertise provided by Federica Ornelli. Inaugurated on Sunday 27 January 2019, the exhibition will remain open to the public until 14 July at the Holocaust Museum Foundation in Via del Portico di Ottavia, 29.

“The will and the capacity to prevent even the slightest risk of a return to the horrors of those dark days should be strengthened by the awareness that it is possible to follow one's conscience, to not be afraid and to find the inner strength to react and the courage to not accept prejudice and inhumanity.” These are the words with which the Foreign Minister, Enzo Moavero Milanesi, in his preface to the exhibition catalogue, highlights the message which comes from the experience and the actions of “the best among those who represented the diplomatic corps.

”Supported by the Holocaust Museum Foundation in collaboration with the Farnesina, the exhibition reconstructs a period in history, through photographs, documents, film footage, maps and newspaper articles which begins with the changes that took place within the Foreign Ministry and its overseas network following the promulgation of racial laws. The focus of the show is represented by the exceptional documentary resources retrieved from the Historical Diplomatic Archive of the Ministry, which have not yet been listed and are almost completely unedited. After offering a comprehensive review the situation of Jewish people in the world in 1938, thanks to the reports made by diplomats on the massacres and deportations, the exhibition focuses on certain specific areas. Among these is the area of Italian occupation in Croatia, where diplomats refused to hand over Jews to local forces. What is also highlighted are the efforts of some diplomats to save not only Italian but also non-Italian Jews residing abroad with the reconstruction of some of the most significant biographical and humane accounts given by both diplomats and those who were persecuted.

In addition to the Documentary Sources of the Farnesina, other important material was made available by the United States Holocaust Memorial Museum in Washington, by the Israeli Yad-Vashem Institute, by
various Memorial Museums in Europe, by the German Historical Diplomatic Archive (Politisches Archiv des Auswärtigen Amts), by the Centre of Contemporary Jewish Documentation (CDEC) of Milan and by the same Holocaust Museum Foundation in Rome. The exhibition is also sponsored by the Prime Minister's Office, by the Department for Equal Opportunities of the Cabinet, the Department for Cultural Heritage and Activities, the Region of Lazio, the City of Rome-Roma Capitale, the Union of Jewish Communities of Italy, and the Jewish Community of Rome, and was made possible by the general organisation of 'COR - Create, Organise, Realise' of Alessandro Nicosia. 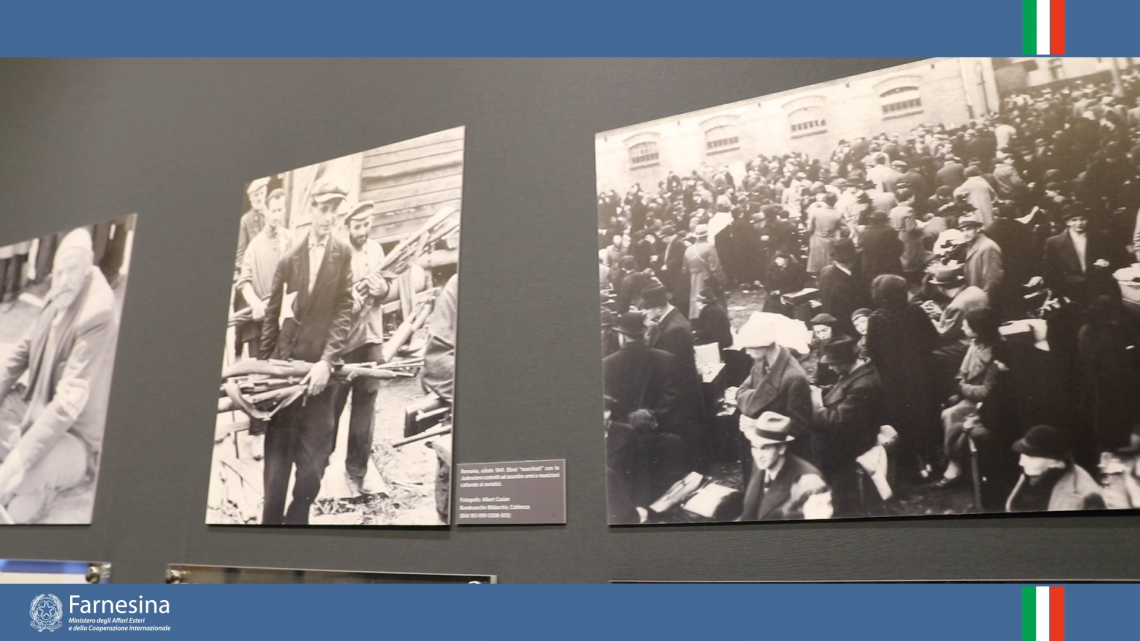