NATO: A documentary retraces the steps that led Italy to join the Treaty

To celebrate the 70th anniversary of the signing of the North Atlantic Treaty on 4 April 1949, the Rai public broadcasting company will air a documentary entitled ''Telegramma 2171. L'anno del Patto Atlantico'' (“Telegram 2171. The Year of the Atlantic Treaty”), co-produced by Rai Storia and the Diplomatic Historic Archive of the Ministry of Foreign Affairs and International Cooperation. Through original documents, photographs, film clippings, the testimony of politicians and diplomats and the analysis of historians and editorialists, the documentary traces the developments that brought Italy to join the Atlantic Treaty. The documentary will be aired at 9 p.m. on 3 April on Channel 54 of DTTV and on Channel 805 of Sky TV and will be rerun at 9:30 a.m. and 6:30 p.m. on 4 April and at 5 p.m. and 11 p.m. on 9 April. 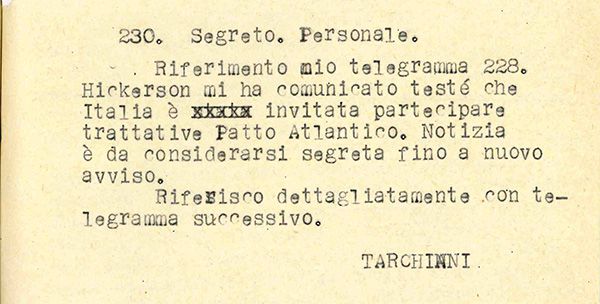