It was launched into orbit at night from the base of Kourou (French Guiana) the European carrier VEGA, of Italian realization for the VV16 mission. Designed and built by the company AVIO of Colleferro, in the province of Rome, VEGA has released in space, on different orbital heights, 53 nino, micro and mini satellites. Among them the Italian Israeli scientific satellite CubeSat DIDO-3. It is an Italian Israeli space project aimed at carrying out four experiments in biology and pharmacology. The experiment will be performed under microgravity conditions created in a laboratory and controlled from Earth through a mobile application.

The arrival in orbit of the small satellite (weighing less than 6 kg) is one of the successes of the fruitful collaboration within the Industrial Scientific and Technological Agreement between Italy and Israel and was developed within a joint project of the Ministry of Foreign Affairs and International Cooperation (MAECI) and the Israeli Ministry of Science and Technology (MOST), with the participation of the space agencies of the two countries, ASI and ISA. Italy has borne the costs of the launch and release into orbit, which took place using the payload dispenser SSMS (Small Spacecraft Mission Service of the Vega launcher, produced for the most part by the Italian space industry) and financed the implementation of the project.

Such projects were funded by the Ministry of Foreign affairs and International Cooperation (MAECI). In 2018 they were selected by a bilateral joint committee in which the Israeli Ministry of Science and Technology and the space agencies of the two countries, ASI and ISA also participated. The experiments in microgravity were developed by the joint laboratory between Italy and Israel by four Italian universities, the University Federico II of Naples, Tor Vergata University of Rome, Alma Mater Studiorum of Bologna and Roma Tre University in Rome.

The Israeli partner is Space Pharma, funded by ISA and MOST, which realized the satellite that brought the experiments into space. 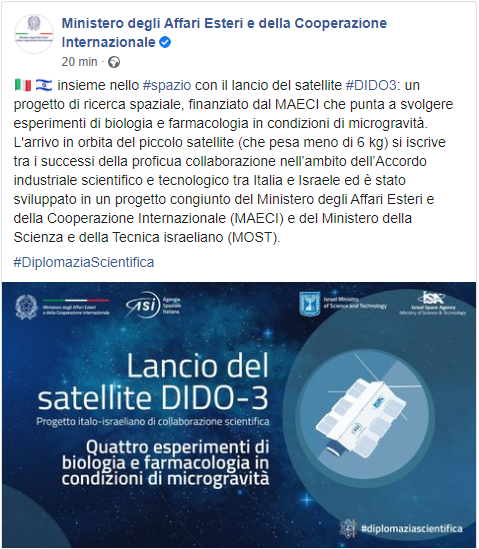