The Vice Minister of Foreign Affairs and International Cooperation, Marina Sereni, is visiting Qatar, where she has today held a series of meetings with Qatari government authorities. In the morning Sereni saw the Minister of State for Foreign Affairs, Soltan Al-Muraikhi, and the Assistant Foreign Minister and spokesperson, Lolwah Al-Khater. Both parties expressed their satisfaction for the excellent state of bilateral relations, characterized by an articulated, fruitful, and intense collaboration in all major sectors, which Italy and Qatar intend to further deepen in a Strategic Dialogue. The talks also examined the leading regional and international issues, in particular, the most recent developments in Libya, the Middle East peace process, the situation in Lebanon and Iran, as well as the prospects for relations between Gulf Cooperation Council countries.

The talks at the Ministry of Foreign Affairs were preceded by a meeting with Her Excellency Sheikh Hind bin Hamad Al-Thani, sister of the Emir and CEO of Qatar Foundation, the prestigious foundation active in the field of education, research and innovation. The visit, which took place at the Qatar National Library, an entity part of the foundation, was an opportunity for an exchange of assessments on the strengthening of cultural relations and between universities and research institutions to launch new projects and collaborations. Emphasizing the importance of expanding this heritage of contacts, the SereniVice Minister renewed the gratitude of the Italian Government for the aid received by Qatar in the most critical phase of the pandemic and encouraged to further develop the ongoing scientific cooperation in the fight against COVID-19.

Also scheduled an interview with the Undersecretary of Labour, Mohammed Al Obaidly, and the Director of the International Labour Organization Office in Qatar, HoutanHomayounpour, for an update on the historic reform of Qatar's legislation on the protection of foreign workers that has recently led to the introduction of a mandatory and non-discriminatory minimum wage for all categories of workers.

Tomorrow the Vice Minister Sereni will meet, among others, the Minister of Culture and Sport, Salah Al Ali, the Emir's Advisor for National Security, Mohammed Al Masnad, the Special Envoy of the Minister of Foreign Affairs for counter-terrorism and conflict mediation, Mutlaq Al-Qahtany, and the President of the Qatar National Library, Hamad Al-Kuwari. 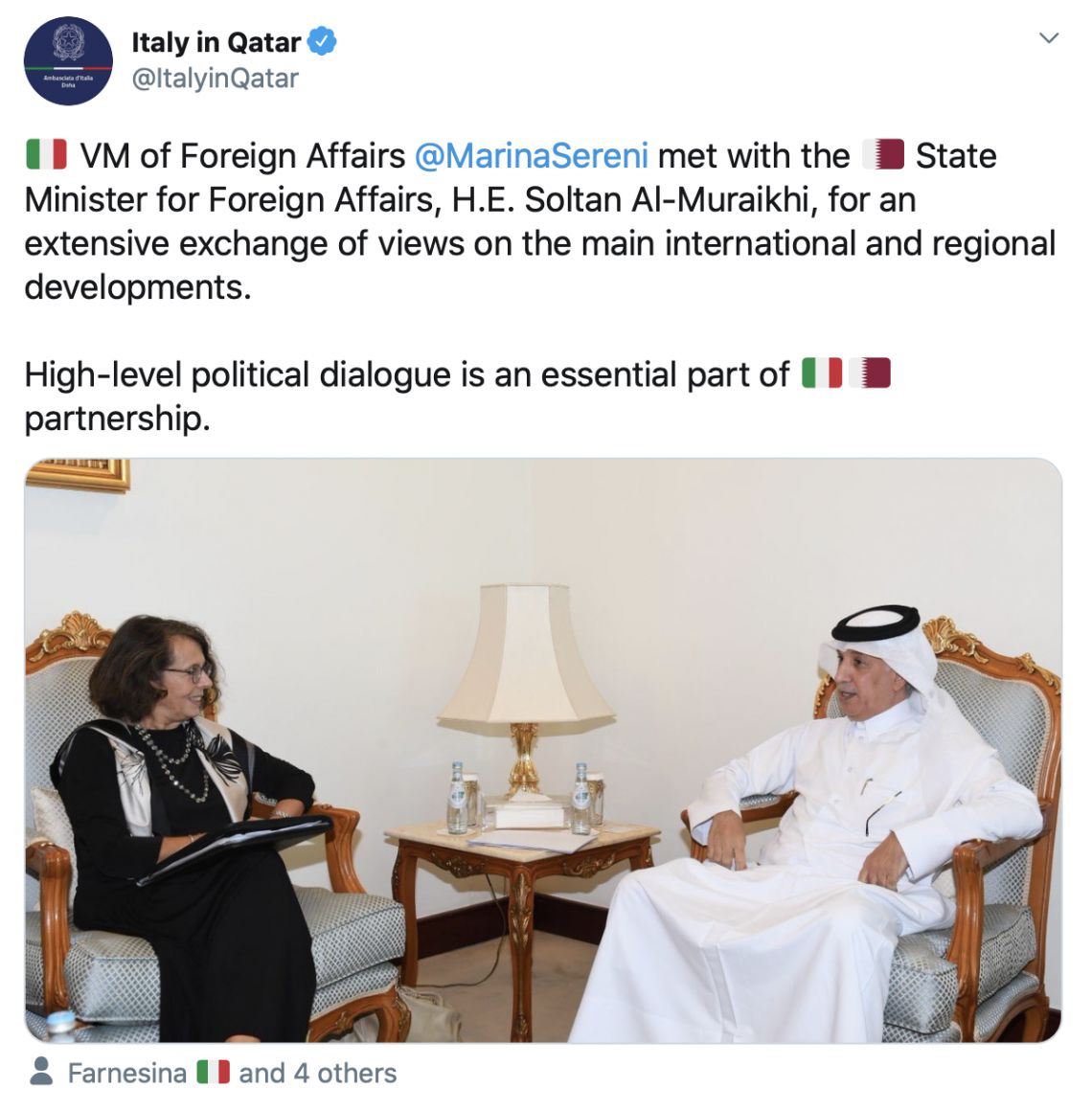