Vice Minister Emanuela Del Re wraps up her visit to Mali with a meeting with the Prime Minister, Moctar Ouanee. The key issues touched on: the development, security and good governance in the country.

"It was with joy and satisfaction that I announced to the Head of the Government the imminent opening of an Italian Embassy in Bamako. This will strengthen relations and collaboration between Mali and Italy. The two countries already share a long history of friendship and partnership " - Ms. Del Re said - "The vision illustrated to me by the Malian Prime Minister aims to place the person, the citizen, the welfare of the people at the centre of the political action of the transitional government. Mali can rest assured that it will have Italy at its side in the pursuit of this platform".

An equally fruitful meeting was with Bouaré Bintou Founé Samake, Minister for the Promotion of Women, Children and Families. The Vice Minister recorded a consensus of opinion on the promotion and protection of human rights and, in particular, on women and girls and the more vulnerable groups.

"Italy recognises the promotion of women's rights as a precious asset in all fields and we are committed to creating an environment conducive to gender equality in the political, economic, social, cultural and civil spheres" - Ms. Del Re added - "Italy confirms its support for the protection of vulnerable groups in Mali, in coordination and synergy with the programmes implemented in other countries in the region and with regional organisations such as ECOWAS, the Economic Community of West African States".

With Minister Founé Samake, Ms. Del Re participated in the presentation event of the initiative on "Strengthening the capacity of institutions and communities to react against gender-based violence in the districts of Gao, Tombouctou, Kidal, Mopti and Bamako" funded by Italian Cooperation. 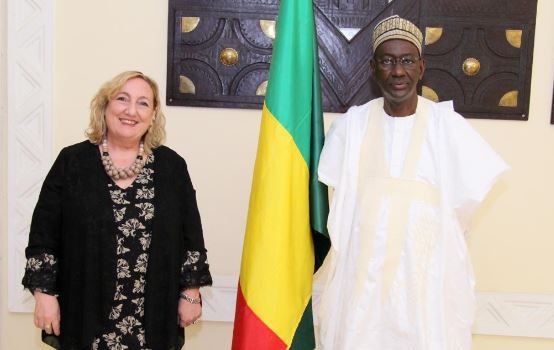