Visit to Poland by Undersecretary Scalfarotto

The Undersecretary of Foreign Affairs Ivan Scalfarotto paid a two-day visit to Warsaw on 29 and 30 September. During the mission, the first operational follow-up to the visit to Italy of the Polish President, Andrzej Duda, Undersecretary Scalfarotto met the Secretary of State for Infrastructure, Rafal Weber, and Foreign Affairs, Szymon Szynkowski.

The meeting with Vice Minister Weber focussed on examining the opportunities for Italian companies arising from the Polish Government's programmes for the coming years in the sector, where investments of several tens of billions of euros are planned.

During the talks at the Ministry of Foreign Affairs, Vice Minister Szynkowski and Undersecretary Scalfarotto agreed on the enlargement of the EU to the Western Balkans; on the need for an immediate end to the opponent's persecution in Belarus and for dialogue to begin; on the Eastern Mediterranean situation. In the EU, Scalfarotto and Szynkowski agreed on the need for innovative and shared solutions to the issue of migrants and the overcoming of the Dublin mechanism; and on the urgent need to allocate the resources of the Recovery Fund as soon as possible, to transform the crisis caused by COVID into an opportunity for reform and growth also in terms of "green economy".

The mission was also an opportunity for a meeting between Undersecretary Scalfarotto and the Italian business community in Poland. Such community contributed to crate the excellent "business climate" in the country, where there are about 2500 Italian companies.  Italy is now Poland's second-largest trading partner among EU countries (behind Germany) and the third largest globally (after Germany and China). Finally, the Undersecretary had an interview with the deputy Ombudsman, Hanna Machińska, for an examination of the civil rights situation in the country, with particular reference to the LGBT community, recently the subject of very heated attacks during the election campaign in Poland, defined by Scalfarotto as not in line with the standards expected of an EU member and for which he expressed deep concern.

"My presence in Warsaw, just a few days after President Duda's visit to Rome, confirms the Italian willingness to relaunch the relationship with this great friend country, with its countless ties with Italy in all fields of human activity," said Scalfarotto at the end of the visit. 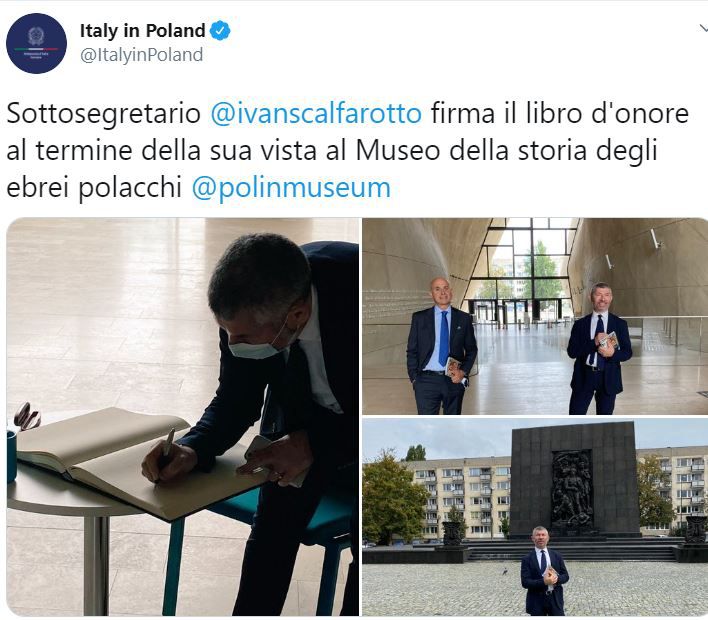