”Innovation and the future: the world of Italian Cooperation". This is the title of the two-day event to take place in Rome on 24 and 25 January. Although a review will be made of the activities performed, it is also meant to represent a point of departure, in which the results of the ordinary activities that have been carried out jointly by the Ministry and the Non-Governmental Organisations (NGOs) will be presented at the conference alongside new themes such as diasporas, the private sector and universities. The Conference is a long-anticipated event. There have been many strides forward since the last Conference, held in 2012, namely: a reform act passed, thus empowering the stakeholders of decentralised cooperation; and new challenges met, such as more extensive migration flows or the conditions of migrants in Libya. All such activities have sought to create new jobs, both in Italy and the countries where the projects have been carried out.

The theme of the Conference is "helping one another". "Italy wants to become a major player in the field of international cooperation," said Minister Alfano. "An example of such determination is the possibility granted of resorting to the Cassa Depositi e Prestiti, acting as a development bank at the national and international level," added the head of Italian diplomacy. "This new approach will lead to a broad partnership in Africa, ranging from development cooperation to security, investments and migration management," continued Minister Alfano.

The 'general assembly' on cooperation has been organised by the General Directorate for Development Cooperation (DGCS) of the Ministry of Foreign Affairs and by the Italian Agency for Development Cooperation (AICS), and will take place at the Auditorium - Parco della Musica. The addresses expected to be delivered are by the Foreign Affairs Minister, Angelino Alfano, and by the deputy Minister Mario Giro. They will be followed by those of Prime Minister Paolo Gentiloni, as well as Minister Carlo Calenda and Minister Gianluca Galletti (the heads of the Economic Development and Economy and Environment ministries, respectively). The Conference will be attended by international dignitaries such as the President of the Central African Republic, Faustin-Archange Touaderà, the Minister of Finance of Senegal, Amadou Ba, and Neven Mimica, European Commissioner for International Cooperation and Development. Representatives of international organisations and associations are expected to attend, and will include members from UNHCR, the World Bank, Comunità Sant'Egidio, and Carta di Roma. Members of the Academia are also expected to participate, as well as entertrainment celebrities such as the singer Karima and stars from the web-based series 'The Jackal'. 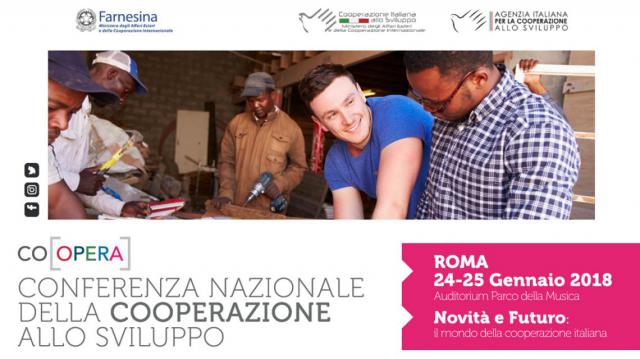