The MAXXI Collection has become an ambassador of dialogue between peoples and an instrument of cultural diplomacy because art can build bridges to overcome isolationisms and nationalisms. The exhibition "Classic Reloaded.Mediterranea", curated by Bartolomeo Pietromarchi, director of MAXXI Arte, together with Eleonora Farina, running from 29 November to 31 January 2019, will bring to the halls of the Petit Palais at the Bardo National Museum of Tunis a selection of the works of the MAXXI Collection, after it was first displayed at Villa Audi - Mosaic Museum of Beirut. The project is part of the integrated cultural promotion programme "Italy, Cultures, the Mediterranean" launched by the Italian Foreign Ministry (MAECI) and addressed to the Countries of the Middle East and North Africa and, in 2018, organised in Tunis in partnership with the Italian Embassy in Tunisia and the Italian Cultural Institute in Tunis. "Classic Reloaded" suggests a reinterpretation and revival of an identity based on a common heritage, a cultural and artistic groundwork from which to start re-establishing a dialogue in order to facilitate mutual understanding among peoples, now more necessary than ever and a true antidote against any form of fundamentalism. Through the 20 works by 13 Italian artists belonging to the museum’s collection, the exhibition aims to represent the culture of “the sea lying between lands”, a cultural autonomy and simultaneously an opening to others, the coexistence of peoples, the connection between local and global, which has always characterised the Nations bordering on the Mediterranean. The works displayed will engage in a dialogue with the ornamental decorations of Tunisian, Andalusian and Turkish influence of the Petit Palais, the 19th century villa built by Hussein Bey as a gift for his daughter and later disassembled and reassembled at the Bardo Museum. The juxtaposition with the marvellous spaces of the Tunis-based museum further strengthens the connection with the Byzantine tradition inspiring the golden background of Senza Titolo (“Without Title”) by Gino De Dominicis, or the ironic reference to Roman mythology in Lapsus Lupus by Luigi Ontani. The installation "La stanza dei verticali" (“The Room of the Vertical Lines”) by Remo Salvadori, with its sensual use of copper and its reference to the founding concepts of geometry, brings us back to classical architecture, while the sculptures by Bruna Esposito, in polychrome marble and bamboo brooms, make a mix of their domestic and architectural dimensions. Through his snapshots, Mimmo Jodice reinterprets and gives new life to sculptures, paintings and mosaics from the classical era while Flavio Favelli, with his collage of rugs from different places that composes "Fiori Persiani" (“Persian Flowers”), reproduces the language of dialogue and of coming together which is part of the Mediterranean identity. On display will also be the ceramic objects by Salvatore Arancio, which bring us back to autochthonous popular traditions full of archaic and mythological references, and the works by Sabrina Mezzaqui which are a reminder of an extremely refined, thousand-year-old artisanal culture and of the art of embroidery and cut-outs, which engage in a perfect dialogue with the Moorish decorations. “Icosaedro” by Pietro Ruffo is the expression of the aniconic and ornamental aesthetics of Arab-Muslim inspiration while Luca Trevisani’s compositions ponder over the concept of presence and absence, fragility and equilibrium, the combination of concepts which form the basis of classical sculptures. The itinerary of the exhibition ends with a piece by Liliana Moro: the sound of a singing bird whistled by the artist herself, which acts as the counterpoint to the ornamental patterns decorating the halls; alongside this display are two works that take us back to the cult of the dead, burials, of the hypogeum: Mother, the buried fakir by Maurizio Cattelan and Porta addormita (“Drowsy Door”) by Enzo Cucchi, a painting-sculpture with bunches of skulls, both of which are capable of catching our attention and of leading us beyond the threshold. 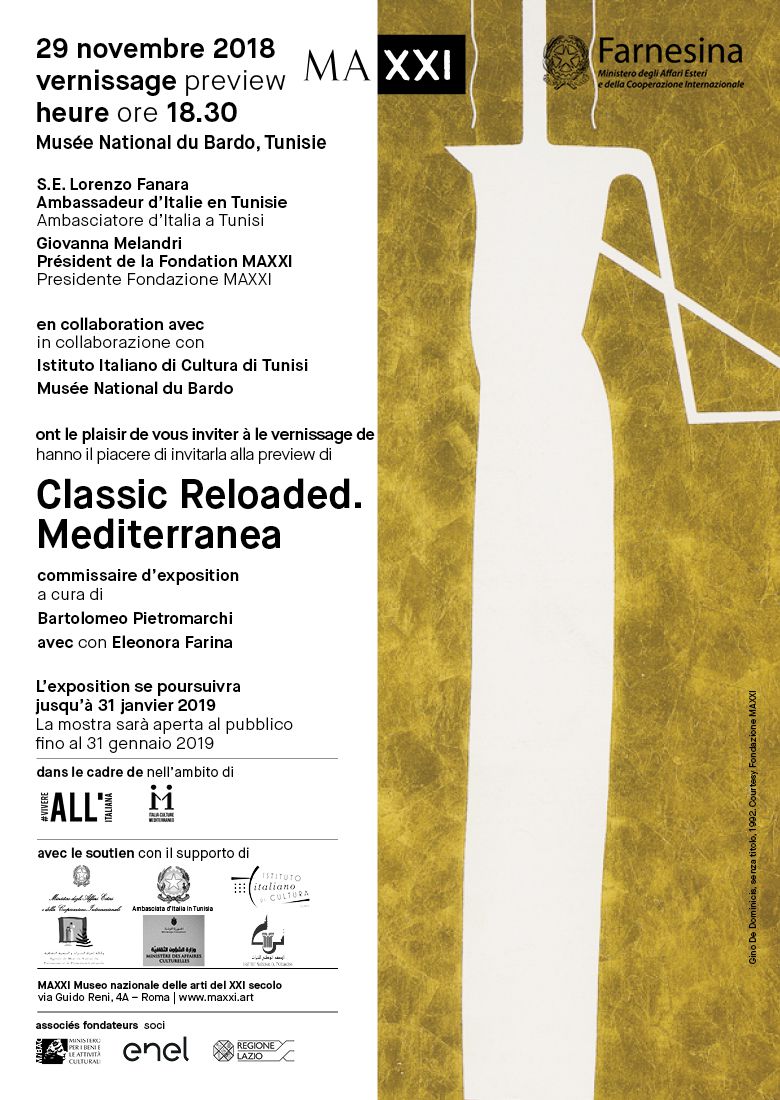