The “Sanremo Giovani World Tour”, promoted by the Foreign Ministry in partnership with the Rai Communications Directorate, kicks off with the ambitious goal of taking on a tour of five continents the finalists of Sanremo Giovani 2018:

Deschema, Einar, Federica Abbate, La Rua and Nyvinne. It is a unique opportunity for these young artists who are given a chance to make themselves known in other Countries and it is also an investment on emerging talents. The young talents of the past edition of Sanremo Giovani will thus have “the world as a stage” under the Sanremo brand, which is synonymous to good music and big hits, further enhancing its popularity.

For Rai too it is a reason for great satisfaction because the Sanremo Giovani Rai1 project has been dedicated a large amount of resources and planning, turning the 2018 edition into a preview edition of the Festival and dedicating to the artists the programming of a whole week, with 4 afternoon and 2 prime-time broadcasts.

The Tour will stop in seven cities in five continents: it will start off on 31 March in Tunis and then fly to Tokyo on 3 April, to Sydney on the 6th, to Buenos Aires on the 9th and to Toronto on the 12th, before returning to Europe, with the last two stops scheduled in Barcelona and Brussels, on 15 and 16 April respectively. Mahmood, the winner of the 69th edition of the Sanremo Festival, assured he will be present on the Tour’s first stop in Tunis and in its last stop in Brussels.

The event, which will be organised by the Italian Cultural Institutes in close cooperation with the Embassies and Consulates, is part of the Foreign Ministry’s “The Italian Way of Life” integrated promotion programme that, since 2017, has been combining the different components of economic, cultural and scientific promotion of Italy in a systemic promotional approach applied worldwide. 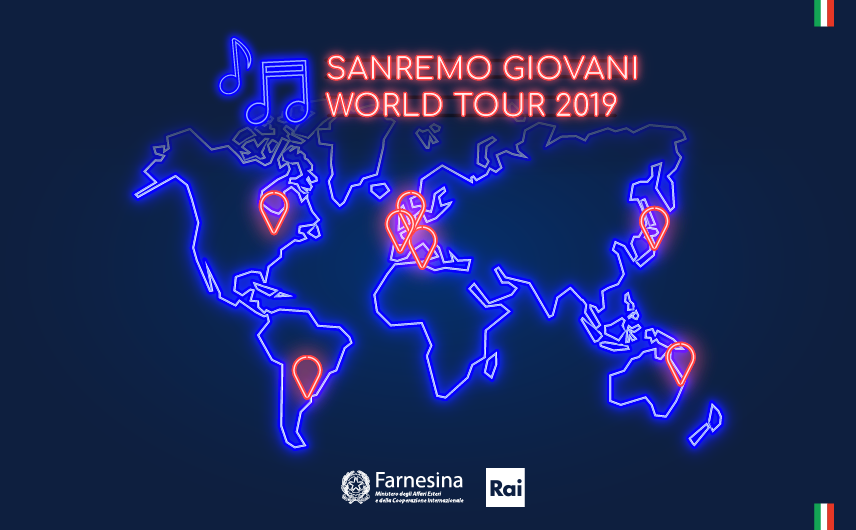