Tokyo: Castellani's restored work is again at the Embassy

The work "White Surface" by Enrico Castellani is finally again on display at the Italian Embassy in Tokyo after a meticulous restoration courtesy of the Prada Group. This extraordinary initiative that gives prominence to Italy's cultural heritage is tge result of a coordinated endeavour involving the Embassy, ​​the Prada Group, the Enrico Castellani Foundation and the Formica Restoration Studio. 'White Surface', which belongs to the Farnesina collection held at the Embassy, ​​has been relocated to the entrance hall of the Embassy Residence. The painting, now restored to its original conditions after the painstaking intervention of the Formica Restoration Studio in Milan, dates back to 1966 and since then destined by the Ministry of Foreign Affairs to be housed at the Italian Embassy in Tokyo. The restoration was preceded and guided by a thorough examination of the conditions of the work and careful choice of the methods of intervention, with the full involvement, from the earliest stages, of the Enrico Castellani Foundation. All the parties involved in this endeavour - Enrico Castellani Foundation, Prada Group, Embassy of Italy in Tokyo and Study of Formica Restoration - jointly agreed to have the painting carefully cleaned first and then have the tears repaired. The interventions, carried out in accordance with the highest standards of workmanship, allowed full recovery of the chromatic and volumetric values ​​of the work. 'White Surface', which is part of the Farnesina collection kept at the Embassy, ​​has been relocated to the entrance hall of the Embassy Residence with a ceremony during which the Ambassador of Italy to Japan, Giorgio Starace, said: "The restoration, carried out by the Formica Studio of Milan and financed entirely by Prada, brought back to its original beauty the work we are honored to hold at our Embassy. This was a very successful example of collaboration between the Italian institutions and a great firm that is very sensitive to our Country's artistic and cultural heritage: Prada. So my sincerest gratitude goes to Miuccia Prada and Patrizio Bertelli. I am also grateful to the President of the Enrico Castellani Foundation, Lorenzo Wirz Castellani, for the precious support provided during these months". In turn, Lorenzo Wirz Castellani said: «I am particularly grateful to all those who have contributed to the success of this important restoration project. It was very exciting to see Enrico Castellani's work before the restoration and then admire the result when the work was completed. I am particularly pleased that others can now enjoy this exceptional relief surface and that this work, which is unique in its kind, has returned to its location at the Italian Embassy in Tokyo.This location is dear to me also considering the close ties my father had with Japan ever since the early 1960s, which were renewed by the conferral of the Praemium Imperiale for Painting in 2010, and further confirmed today". Patrizio Bertelli, CEO of the Prada Group, said:" I welcomed Ambassador Starace's proposal to support the restoration of this important painting, the work of one of the most emblematic Italian artists of our time, to whom I was bound not only by a relationship of admiration for his work, but also by ties of personal friendship. Contributing to the restoration of this work was not only an opportunity to return an important work of art to the artistic heritage of Italy, but also to pay tribute to the memory of a friend ». 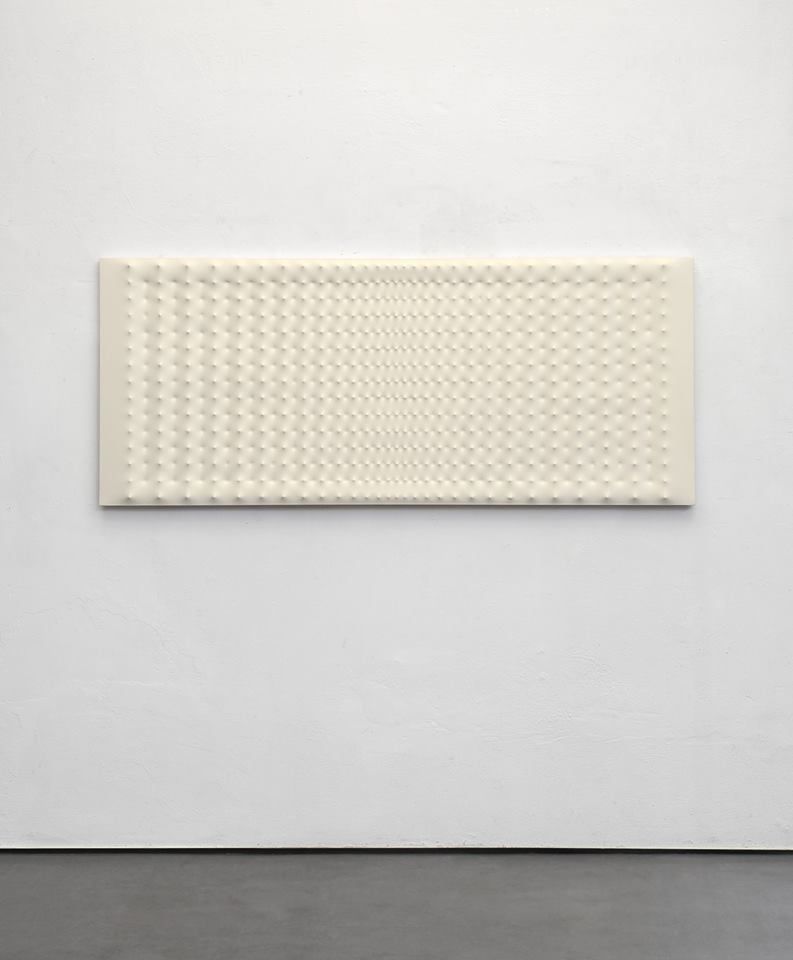