The Italian Cultural Institute in Prague hosted the first 3-day Multidisciplinary Conference of Italian Scientists and Scholars active in the Czech Republic. The conference agenda was subdivided into three principal macro-areas: biomedicine, physiology and biotechnology; physics, chemistry and engineering; and lastly human sciences, economics and archaeology.

The conference offered the “opportunity to consolidate the bilateral relations between Italy and the Czech Republic, primarily thanks to the precious contribution of Italian researchers who elevate science to an instrument whereby to promote our Country on the global scene,” as said by Italian Ambassador Francesco Saverio Nisio at the Conference opening ceremony. The need to keep profile of Italian research abroad high in view of the importance of scientific cooperation for future generations, was recalled by Luca Vannucci, conference coordinator and the director of the Immunotherapy Laboratory at the Microbiology Institute of the Academy of Science of the Czech Republic.

The Conference attracted a large crowd of Czech academicians, including the Vice Rector of Charles University, Miroslav Barta, the Vice Rector of Masaryk University, Petr Dvorak, a member of the Academy of Science of the Czech Republic, Martin Bilej, the director of the Research and Development Department of the Ministry of Education of the Czech Republic, Lukas Levak.

The Conference was organised by the Czech Immunology Society in partnership with the Italian Embassy and the Italian Cultural Institute as part of the celebrations for the 100th anniversary of the opening of the Italian diplomatic mission in Prague and the beginning of diplomatic relations. 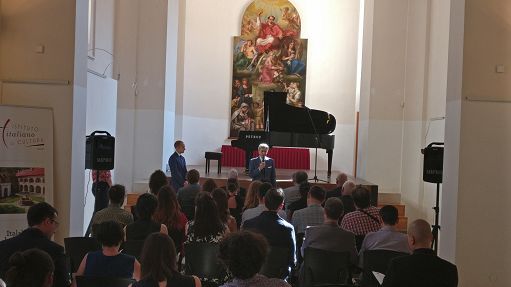